Basil Karlo
Basil was an actor that did B-Movies. He when mad, when he heard about a remake of the movie "The Terror", so he disguised himself as the movie's villain, "Clayface". Then, he started to kill the remake's actors and crew, but Batman and Robin stopped him. Next, Karlo tried to kill Batman's girl friend and fails. He somehow gained powers like the other Clayfaces with no explanation. Much later, he escaped his prison hospital and formed a super villain team with all the still alive Clayfaces, called "The Mud Pack". The team was defeated. Finally, with help of the Looker, Batman melts Clayface...only to have him return.
Matt Hagen
Matt was a treasure hunter until he discovered a mysterious radioactive pool of protoplasm in a cave. After getting in it, he became the 2sd Clayface. However to keep his shape shifting ability, he had to return to the pool. He used his powers of his own selfish ends. A shadow demon killed him in the limited series "Crisis on Infinite Earths".
Preston Payne
Preston became the 3rd Clayface when he put a blood sample of Karlo's into his blood to try and cure his "hyperpituitarism". He gained Basil's powers. Then he discovered he can melt people when he touch them and he needs to do this to live. This drove him so mad that he fell in love with a wax mannequin he names "Helena". So he was sent to the Arkham Asylum.
Sondra Fuller (Lady Clay)
She somehow got Matt Hagen's powers, but her were permanent. She could also copy the powers of who ever she mimics. She was defeated a superhero team called the Outsiders. She later married Preston and have a son Cassius "Clay" Payne.
Cassius Payne
He genetically gained both Preston and Sondra's powers, but didn't need to melt people alive. If a piece of him is removed from him it becomes alive, but it thinks what Cassius wants it to think. He also can bond with humans. His name is a pun off of "Cassius Clay" the real name of the boxer Muhammad Ali.
Claything
His horrible monstrosity was created when skin samples of Cassius fuse with a DEO scientist. He melted people by looking at them. He was destroyed and now the DEO have his remains.
Johnny Williams
Johnny was fire fighter exposed to chemicals giving him clayface like powers. He manipulated by The Riddler to be evil. Eventually, the chemicals killed him.
References:
http://en.wikipedia.org/wiki/Clayface
DC Comics Encyclopedia: The Definitive Guide to the Characters of the DC Universe
Posted by Skippy at 2:57 PM No comments: 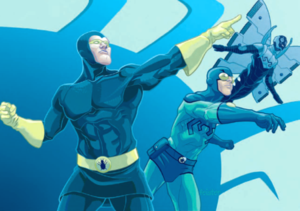 Dan Garret
The first Blue Beetle was Fox Feature Syndicate's Dan Garret (created by Jack Kirby and Joe Simmons). He was a rookie police officer in a blue tuxedo (later he got a bullet proof beetle suit). He was very popular in his time. Later, Charlton Comics revamp him as Dan Garrett. He now had several power (like super strength and vision , flight and the power to make lightning) from a scarab.
Ted Kord
The next Blue Beetle was DC Comics' Ted Kord . Garrett and Kord tried to stop Kord's evil uncle from taking over the world, they stopped him, but Garrett ending dead. So Ted took the name "The Blue Beetle" and Dan's scarab, but had no idea how to use it. So he used Batman like weapons. He eventually died during the "Infinite Crisis".
Jamie Reyes
A year after Kord's death, a boy named Jamie Reyes in El Paso, Texas discover the scarab. During his sleep, the scarab fuse to his spine. When he was in danger the scarab would turn into a super suit with the powers to create weapons (ex: an energy blasters, a sword and shield and a grappling hook),can adapt (ex: make energy discharges from the hands that can stop magic and discharging kryptonite radiation) and talk to Jamie. The suit seems to dislike harming nature.
References:
http://en.wikipedia.org/wiki/Blue_Beetle
http://en.wikipedia.org/wiki/Blue_Beetle_(Jaime_Reyes)
Posted by Skippy at 6:06 AM No comments: