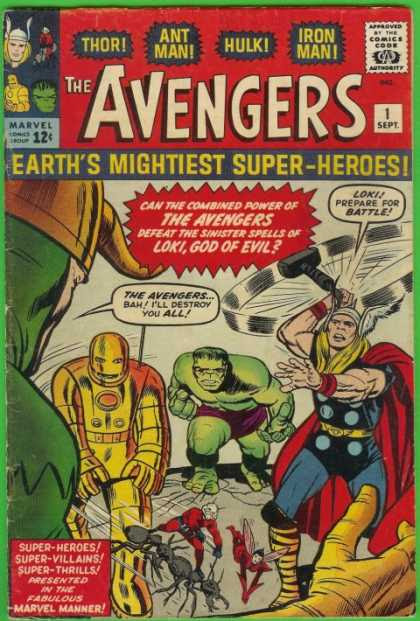 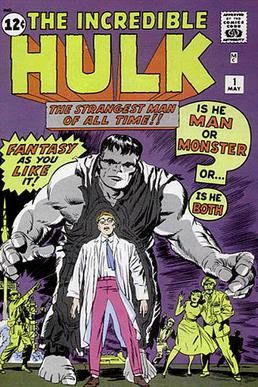 Bruce Banner's father, Brian Banner, feared radiation. Soon, he believed his wife, Rebecca Banner was exposed to it. After Bruce was born, he was convinced he would become a monster. He tried to kill Banner, but killed Rebecca instead. So Bruce was sent to live with his aunt when his dad was sent to jail. In school Bruce was into learning about radiation. Eventually Bruce worked for a nuclear research program. Bruce's boss, Igor Starsky, was really a Russian spy. When the Gamma bomb was being tested a boy, Rick Jones (future sidekick of the Hulk) wandered into the sight. Bruce saved the boy, only to be affected by the radiation and turn into the Hulk. Soon he ended up beating up Igor. Although he was at first grey (and could lift 70 tons), he became green (and easily could lift 70 tons). First his transformation only took place when the sun set, later Bruce built a machine to control the change and finally the Hulk became free, when Bruce got mad. His rouge villain gallery include the hypnotic Ringmaster, the super smart Leader, the evil wizard Loki, Abomination and Madman (both have the Hulk's power, but stay smart), the psonic M.O.D.O.K and even some heroes like Thor, The Fantastic 4, Spider Man and the X-Men.
References:
Incredible Hulk Ultimate Guide
Posted by Skippy at 9:53 AM No comments:

X-Men part 2: The More, The Merrier 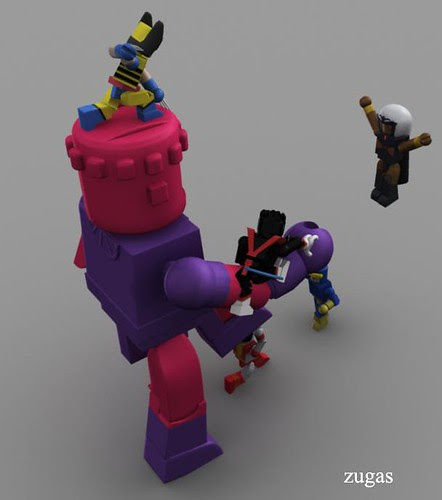 All of the X-Men, except Cyclops, were held captive by Krakoa, the living island. So Xavier gathered new mutants to save them, they were Colossus a.k.a Piotr Nikolaievitch (able to turn his body into a metal organic substance), Storm a.k.a Orro Munroe (able to control the weather), the Night Crawler (able to teleport, blend in with shadows and looks like a demon), Wolverine a.k.a James Howlett a.k.a Logan (ages super slowly, heals super fast, can draw claws out of his forearms and has acute senses), the super strong and durable Tunderbird a.k.a John Proudstar and former criminals Sunfire and Banshee a.k.a Sean Cassidy (able to fire powerful sonic waves from his mouth). After the original X-Men were safe, all of them (but Cyclops) quit the X-Men, only to rejoin later. Thunderbird died on his 2nd mission and Sunfire quit because he is a loner.
References:
X-Men Ultimate Guide
http://farm4.static.flickr.com/3361/3237072719_0356814c5e.jpg
Posted by Skippy at 9:30 AM No comments: 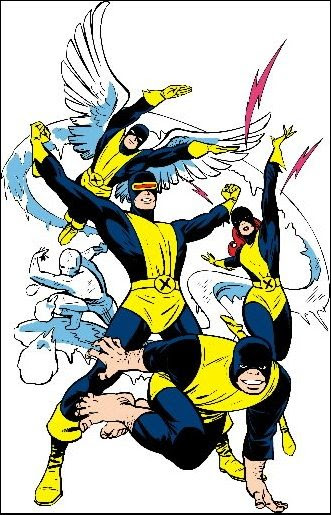 A crippled telepathic and telekinetic mutant called Xavier dreamed of a time when "normal" humans and mutants could live in peace. But he knew some mutants opposed this idea. So he decided to form a mutant super hero team. He had the somewhat tragic Cyclops a.k.a Scott Summer (who shoots force beams from his eyes); the winged Angel a.k.a Warren Worthington the 3rd; the smart, agile Beast a.k.a Henry McCoy (in human form); the hot shot Ice Man a.k.a Bobby Drake (turns moisture into ice) and the also the telepathic and telekinetic Marvel Girl a.k.a Jean Grey (later known as the Phoenix). Their main foe was Magneto (a mutant with magnetic powers). However they also fought the hypnotic Mesmro, the teleporting Vashiner, the Brother Hood of Evil Mutants (the members were the telepathic Mastermind, the super fast Quicksilver, the jumpy Toad and the magic-like Scarlet Witch) and flying / fire shooting mutant Sunfire. Soon the Beast drank a chemical turning him into a fur ape-man-thing. Xavier died while stopping the mad Gortesk, only it was later revealed that a shape shifting mutant known as Changeling was actually the one who died.
Source(s):
X-Men Ultimate Guide
Posted by Skippy at 8:39 AM No comments: 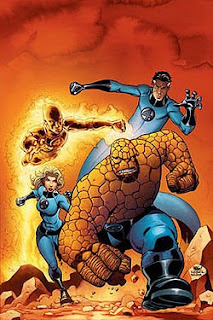 Welcome to the Comix "Secret" HQ. Here you'll learn things about some comic characters you may have never known! My entries will include information on Daredevil, The Incredible Hulk, The Amazing Spider Man , The Uncanny X-Men and The Fantastic Four. Also some less well known like The 3-D Man, The Black Marvel and The Ghost(a.k.a The Flying Dutchman). You'll learn their secret identities, powers, weapons and other cool stuff.
Posted by Skippy at 8:23 AM No comments: