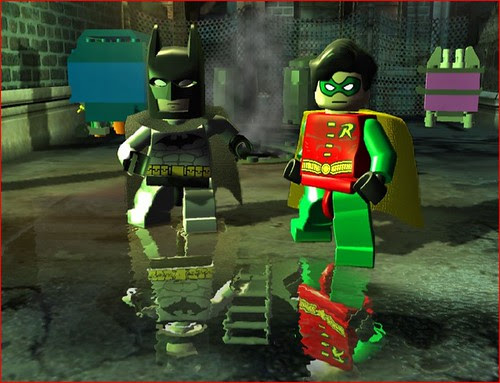 Batman and Robin from Lego: Batman the Video Game
Bruce Wayne's parents were killed by a mugger. So Bruce while growing up learned fighting styles and became at the peak of human psychical perfection to become a dark avenger. When a bat went into Bruce's window, he thought it was an omen so he became a "bat": Batman! Unlike most heroes, he uses gadgets (based off of real science) instead of powers. Dick Grayson (Robin) became Batman sidekick, when his patents fell to their death during a trapeze act sabotage by protection-extortionists. He has fought bizarre foes as the Mad Hatter, the Joker, the Penguin, Bane, Catwoman, Man-Bat and Clayface, since 1939. Later Robin left Batman and became Nightwing. He has gone though changes. In fact Bat-Mite said on "Batman: the Brave and the Bold" to a fan questioning the tone of the show:

"Batman's rich history allows him to be interpreted in a multitude of ways. To be sure, this is a lighter incarnation, but it's certainly no less valid and true to the character's roots as the tortured avenger crying out for mommy and daddy. Beside those mutant bunnies look really scary!"

Batman: the Brave and the Bold episode #19

Posted by Skippy at 3:00 PM No comments: 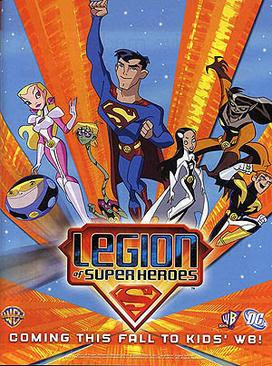 I decided to do something different: instead of basing this blog on comic characters, this is about a comic-based television show! The Legion of Superhero show was a comedy / action show, created by Kids WB!, featuring the Legion of Superheroes. Please note, that season 2 takes places 2 years after season 1. The core members of the show were:


The piture above show what the core legionares look like from season 1. The show was cancel, before they could air the 3rd season, due to the Kids WB! time slot was taken over by 4Kids. If it wasn't cancel the 3rd season would have taken 3 years after the 2sd. How many years could they skip?!

He is an evil monstrosity from another dimension, that wants to take over the world. So he became the arch-enemy of the Mighty Agrippa, the Roman god of the Aqueduct (a Thor parody). He joined the Phalanx of Doom with the Red Scare (a rental Russian villain and one of the Ticks original enemies), Roach (a lady with a tough personality and roach abilities), Fuzzy Person (a humanoid beast covered in fur who can inflate itself), The Underwaterer (a Sub-Mariner parody), Toy de Force (toy-themed mad scientist), Praying Mantis (chubby martial artist girl, who is said to eats men), Lumber Jane (Chainsaw Vigilante's female counterpart) and Candyman (a Mysterio parody). But he was kicked out, for eating Toy de Force! The Tick and his unnamed superhero team got in Tharkkorzog's dimension to learn: there he's tiny. Thrakkorzog makes an army of gelatinous Tick clone, that the heroes defeat by stepping on them. In December 2002, he is seen in The Tick Big Xmas Trilogy in the Tick's pageant as Ebenezer Scrooge.
References:
http://content6.flixster.com/poll/52/85/52856_std.jpg
http://en.wikipedia.org/wiki/Thrakkorzog
Posted by Skippy at 12:52 PM No comments: (If you haven't read Lantern Corps. part 1-2 d0 so before reading this.)

Posted by Skippy at 1:08 PM No comments:

(If you haven't read Lantern Corps. part 1 d0 so before reading this.)

Posted by Skippy at 1:03 PM No comments:

Who ever said the Green Lantern was the only one? There are 7 other corps. (all of them have the 24 hour charge limit and create solid light) each with a different color of the rainbow (expect for black) and emotion. Artist Ethan Van Sciver descird the creation of this as:
" We found the idea of the seven different colors and what they meant, and then we tried to see what each of the different corps would represent and what kind of people they were.
I always call it a religion. I think of these different colors as religions. And I use that word with Geoff, and I'm not sure that he agrees. But the way I think of it is that they all sort of focus around one sort of human drive. Not even an emotion. I know it's called the emotional spectrum, but I tend to use the word 'drive,' because willpower isn't as much an emotion as a human drive. You have the willpower to get something done."

References:
http://en.wikipedia.org/wiki/Power_ring_(DC_Comics)
Posted by Skippy at 11:23 AM No comments:

Cosmic rays turned Doc Magnus (see Metal Men) into a cold-hearted robot. He told the Metal Men to NOT save an another ship from the "Comet Ceature". But they did (thank God for independent robots). Magnus locked up the Metal Men after their heroic deed (for his own protection) and tried to turn himself human again. But only ends up making 5 robots that had powers / names based after the gases, they held in them (as opposed to the metals they were made out of). These robots (the Gas Gang) were completely loyal to Doc. They were the following:

Unlike the Metal Men (who were the Doc's size), the Gas Gang's size varied from 1/3 to twice Doc's size. He ordered the Gas Gang to attack the Metal Men. Chloroform used it's nitrous oxide to cause the Metal Men to have hysteria fits (causing Mercury to literally break up laughing). But Lead turned into a wall to block it. Oxygen tried to rust them. During a chase, Carbon Monoxide tried to poison them. Carbon Dioxide tried to freeze them. Gold manage to turn into a cage and trap the Gas Gang. He connected himself to high voltage conductors causing the Gas Gang to melt and turn into steam. Somehow the steam turned Doc back to normal. 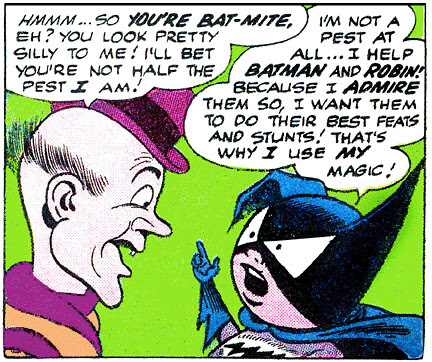 Beings from the fifth dimension have science so advance, we take it for magic! This make the beings not bound by any third dimensional rules / laws, making them essentially omnipotent. Bat-Mite and Mr. Mxyzptlk are two of them. Here some info about hem:

The idiotic Injustice League had the following members:
1. Big Sir- Dufus P. Ratchett had a malformed brain gland allowing him to grow super big, but left him mentally ill and dumb. However, he is a card counter. He was given suit that could allow him to fly and had a powerful energy mace, but vulerable to telepathic sugestions.
2. Cluemaster- He is some guy with Batman-like weapons. His origins are unrevealed.
3.The Clock King- William Tockman's had an ill sister. His doctor told him, he was too! So he tried to rob a bank, in hopes to help his sister's future, but was stopped by Green Arrow. His sister died and in an ironic twist, it turned out William wasn't dying! So he became the Clock King to get his revenge on the Green Arrow!
4. Major Disaster- Paul Booker was a cheap crook, who discover the secret identities of Flash and Green Lantern. He hired criminal scientist to build him weapons allowing him to create "natural" disaster, which they did! The Green Lantern erased Major Disaster memory of who he and the Flash were. Over expose to these weapons gave him the powers to make disasters, without the machines.
5. Mighty Bruce- He was a crook that Major Disaster befriended in prison. He has no known powers.
6. Multi-Man- Duncan Pramble ate something called "Liquid Light". This gave him the power to return from the dead with a new set of power. This caused him to have Bipolar Disorder.
They decide to become a superhero team and invited G'nort (he has a power ring) and Scarlet Skier (see his blog). Thanks to Justice League International's backer Maxwell Lord, they ended up in Antarctia. They sent most of their time battling penguin / piranha hybrids. They only won by causing a earthquake that destroyed their base! They only survived because G'nort's power ring.
References:
http://en.wikipedia.org/wiki/Big_Sir_(comics)
http://en.wikipedia.org/wiki/Cluemaster
http://en.wikipedia.org/wiki/Clock_King
http://en.wikipedia.org/wiki/G%27nort
http://en.wikipedia.org/wiki/Major_Disaster
http://en.wikipedia.org/wiki/Multi-Man
http://en.wikipedia.org/wiki/Scarlet_Skier
http://en.wikipedia.org/wiki/Justice_League_Antarctica
http://upload.wikimedia.org/wikipedia/en/1/16/JusticeLeagueAmericaAnnual1990.jpg
http://dc.wikia.com/wiki/Mighty_Bruce_(New_Earth)
Posted by Skippy at 8:26 AM No comments: