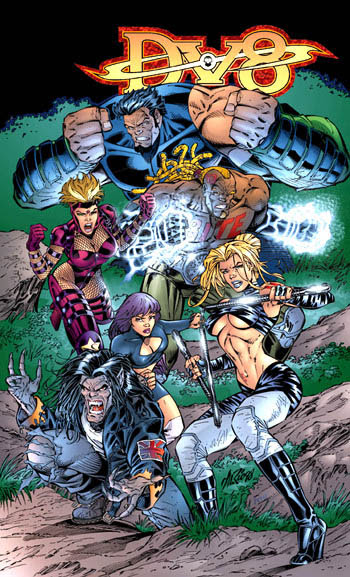 The team DV8 were different from most superhero teams: they were self-indulgent jerks. In addition to not caring about anyone else, they don't like each. The team were basically just pawns of the amoral cyborg Ivana Baiul, the leader. However, the members, especially Frostbite, start to develop a conscience.
Aside from Ivana, the team consisted the psychotic psionic Threshold; the "tough", density-shifting Sublime; the emotion-controlling, amoral Bliss; the nice guy, heat-absorbing Frostbite; emotion converting into power Powerhaus; the mind-controlling, multiple personality Copycat; the insensitive Evo (able to turn into either a bat, wolf or amphibian form); and the upbeat and likable, probability-altering Freestyle. An insane guy called Sideways Bob was the team's "guardian".
The series lasted 32 issues and end with a eight-issue mini-series DV8: Gods and Monsters. The series was characterized by extreme and graphic violence, sexual themes, mild language and how the team were not nice people.
My source was the Wikipedia page "DV8".
Posted by Skippy at 5:35 PM No comments: