What would the Fantastic Four be like if they were evil?
History
Millionaire Simon Utrecht launched himself with his crew into space in the hopes of recreating the accident that gave the Fantastic Four their power. Bruce Banner (not realizing what is going on) used the flight computer to send them back to save them from the threat of the cosmic radiation poisoning. Simon and the crew were exposed to enough radiation to turn them into super humans. Blaming Bruce for "robbing" them of even more power, they tried to kill Banner. During the ensuring battle, they decided on the name "U-Foes". However when they tried to increase their powers, the U-Foes lost controls of them causing them to lose.
Despite this, they returned to menaced the Hulk. While the U-Foes have parallels to the Fantastic Four (both in origin and team dynamic), the U-Foes tends to be dysfunctional and negative. The latter often leads to their disaster. The U-Foes registered for the Superhuman Registration Act and joined the Thunderbolts (who hunted down rogue heroes and villains). When Norman took over S.H.I.E.L.D., the U-Foes become members of North Carolina's superhero team. They also joined the Hood (who turned out to be working with Norman). The U-Foes fought the Avengers several times.
Members
References:
http://www.comicvine.com/u-foes/4060-3238/
http://www.comicvine.com/x-ray/4005-6822/
Posted by Skippy at 8:09 AM No comments:

Angel and the Ape 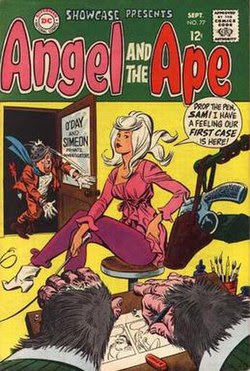 A beautiful weapon master. A cartoonist ape. They fight crime.
History
Angel (a woman) and Sam (a gorilla) ran a detective agency. Sam was also a cartoonist. He originally worked for Brainpix Comix editor Stan Bragg (an egomaniac and crude parody of Stan Lee) and later DZ Comics editor Morton I. Stoop (under whom Sam was more successful). Later, Stan was locked up in a madhouse Mildew Asylum for Sprung Brains. A recurring joke was that no one noticed Sam is an ape. However, Angel ended up becoming more prominent than Sam. They remained in comic book limbo until a 1991 miniseries. Sam turned out to be Gorilla Grodd's grandson. Angel was the half-sister Dumb Bunny (the female member of the Inferior Five). Even later, they got a 2001 to 2002 miniseries for DC Comics' imprint Vertigo Comics.
Powers and Abilities
Angel has hand-to-hand training (in various martial arts such as karate and judo). Angel also is skilled with various weapons. She once hit flies with a bullwhip. Sam has physical traits of a gorilla (such as strength) and human-level intelligence (along with detective skills) although he has trouble speaking due to non-human larynx.
References:
http://www.webcitation.org/mainframe.php

Posted by Skippy at 1:17 PM No comments:

First of the Fallen

This character has interesting story about his creation. The First of the Fallen was intended to be the comic Hellblazer's version of the devil. However, it was revealed in Sandman (which is in the same universe) that Lucifer was the Devil. So, Hellblazer creator Garth Ennis established the First as another character. Despite this, he still managed to screw up continuity.
History
God created the First of the Fallen before life and the Heavens. The First was made to be God's conscience and confidant. However when First discovered God's mental state was worsening, God sent the First to Hell. The Second and Third of the Fallen were banished to Hell soon after. Assuming they had equal power, the First had them become the ruling trinity of Hell. However, Lucifer took over Hell, but later left. As such, the trio returned to power. However, this seems to contradict was established with Sandman (since, in that comic, Remiel and Duma were given control over Hell). John Constantine first met the First in Ireland. It turned John's friend, Brenden, sold his soul to the First of the Fallen. John tricked the First into drinking holy water, which caused him to puke blood and distracted him long enough to let Brenden's soul go to Heaven. The First tried to steal John's soul when he died so the First could torture him. However, Constantine made a Faustian deal with both the Second and Third. To avoid a war over John's soul, the trio was forced to bring John back to life. First became an enemy of Constantine and his friends. The First discovered the Third and Second weren't as strong as him. He killed both of them, but only to be seemingly killed by the succubus Ellie with a knife that made out of the Second and Third's remains. In reality, the First was reborn as a fisherman with the memories of his past. Despite this, he managed to regain his former position. However, he didn't get John's soul, but parts of it that Constantine discarded. The First still constantly fights John.
References:
http://www.comicvine.com/first-of-the-fallen/4005-27431/
Posted by Skippy at 12:49 PM No comments: