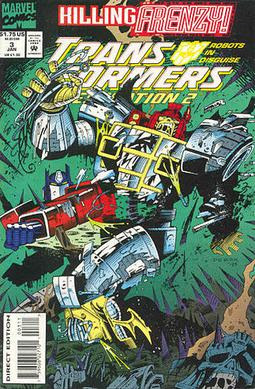 Some of you may know about Marvel's Transformers comics. You may not know about its sequel: Transformers Generation 2 (a comic based off the toyline of the same name).
After the first Transformers comic series, Decepticons (the villains) were defeated and exiled. Optimus Prime (the leader of the heroes) and the Autobots encountered Jhiaxus (the yellow-red guy pictured), a mysterious Transformer, and his army. Jhiaxus revealrf, in the years the Transformers were comatose when they first crash landing on Earth prior to awaking, both factions (save for the Autobots and Decepticons on Earth) ended the war and unified. However, Optimus' Autobots opposed Jhiaxus because he was attacking defenseless planets.

On Earth, Cobra, enemies of the G.I. Joes, rebuilt Megatron for no reason. Megatron took over the Ark (the space ship the Autobots landed on Earth with) to draw out Optimus and steal the Matrix of Leadership. The G.I. Joes and Fortess Maximus destroyed the Ark. Simply delayed, Megatron decided beat up Bludgeon, the current leader of the remaining Decepticons, to regain leadership.

After eerie visions and encountering Jhiaxus, Prime, with aid of the Cybertronian elders, discovered that the Transformers once could reproduce but lost this ability when Cybertron (the Transformers' planet) had enough of a population. However, the elder reactivated this power when the Autobots went missing. The elders screwed this up so the new Transformers (such as Jhiaxus and his army) were flawed. Prime tried to convinced Megatron this is a serious threat. Megatron turned on Prime and stole the Matrix, despite beliving them, and later attacked Jhiaxus... only for Jhiaxus to take the Matrix. Decepticon Starscream defected to Jhiaxus' side in the hope of stealing the Matrix.
The Swarm, a "black energy" mass byproduct of the reactive reproduction, started to eat anything metal and went towards Earth. The Autobots and Decepticons battled Jhiaxus and his army. Starscream did manage to steal the Matrix only for it temporary mind wiped him into being good long enough for it him to give it to Optimus. Jhiaxus went crazy and nearly killed Optimus only to be killed himself by the Swarm. Optimus, figuring out what his visions meant, used the Matrix to give the Swarm a conscience. The Swarm disappear and the Autobots-Decepticons tensions temporary came to a halt. Apparently the outcome of this will be determined by a G2 Drone (the foot soldiers for Jhiaxus) and the mysterious Liege Maximo's conversation. THEN, the series just stops without explaining who Liege Maximo is.
My source was the Wikipedia Page "Transformers Generation 2" and the Atop the Fourth Wall Video "Transformers Generation 2 # 1".
Posted by Skippy at 5:13 PM No comments:

Captain Copyright was a superhero made Canada's Access Copyright agency. He was designed to teach kids about copyright laws. His comic (and website) was canceled due to controversy involving the character (see below). The website is no longer viewable to a "400 Bad Request".
Controversy soon arose. Despite the fact he is the Captain Planet of copyright, some people question if the agency was actually following copyright laws. For example, the character's website had incorrectly sited Wikipedia quotes, which where quickly removed upon recovery. The comic is biased towards that it supports the commerical entity and not the little guy. It also "forgets" to mention concepts like fair use or blank media tax.
The comic has been parodied several times by supporters of fair use.
My sources were the Wikipedia page called "Captain Copyright" and http://www.techdirt.com/articles/20060601/0139207.shtml
Posted by Skippy at 5:08 PM No comments:

In January 2000,  Ron Marz, Mark Waid and Barbara Kesel (with the aid of Mark Alessi and Gina M. Villa expanding the fictional universe) founded CrossGen Comics. The company tried to diversify its publications  by covering various genres while sharing a single fictional universe (unofficially called Sigilverse).
The first wave of CrossGen included a "military science fiction space opera" called Sigil, a fantasy called Mystic, Meridian (inspired by "traditional folklore"), Arthurian legend-inspired adventure called Scion and a fiction universe-expanding CrossGen Chronicles. Each of the protagonists of these comics had sigils that gave them powers and were dubbed "Sigil Bearers".
The first wave was quickly followed by other titles. 2000 unveiled the Homer myths-inspired The First. After 2001, the Atlantean myth-based Crux, epic fantasy Sojourn, Victorian detective story Ruse and Negation. Horror comic Route 666, samurai drama The Path and comedic Way of the Rat came out of 2002. 2003 had titles building up to "Negation War": Solus and Mark of Charon (which were meant to explain the origin of the sigils), Chimera ("about a Sigil-bearer on the far reaches of the Universe" according to Wikipedia), sword and sorcery Brath and pirate story El Cazador. Despite supposedly being in the same universe, these titles rarely crossed over. The most notable exmaple of an actual crossover was Negation War, a company cross over that never was finished.
CrossGen became CrossGen Entertainment in 2003. They formed 11 sub-companies. For reference, Stan Lee managed to write 8 comics by himself, yet these guys (with more people) need  11 sub-companies. Code6 (one the sub-companies) published out-of-continuity comics, such as The Crossover, Demonwars and The Red Star, that were actually owned by CrossGen Entertainment. Comics on the Web (another sub-company) allowed fans to download digital copies of actual comics, however users had to hover over the word balloons to actually read them.
When a scandal involving "systemic financial problems" was exposed, creators left like it was a sinking ship. This and Barnes and Nobles and Borders returning tradepaperbacks led the company to file bankruptcy.
Joe Quesada, editor-in-chief of Marvel Comics, announced Marvel will try to revive CrossGen.
My source was the Wikipedia page "CrossGen".
Posted by Skippy at 5:43 PM No comments: