History
Due to Marvel's turning againist CCA, they adopted the Mavel Rating System. It started out in 2001 as:
The Motion Picture Association of America got mad as they hold the copyright for the term "PG rating". So, Marvel changed it to:
However, in 2005, they switched to a new version of it:
References:
http://en.wikipedia.org/wiki/Marvel_Rating_Systam
Posted by Skippy at 2:05 PM No comments:

Clockwise: Rat (Top right), Pig, Goat and Zebra the four main characters
Origin
Stephen Pastis (the creator of the strip) tried (failed) to get a comic called Rat (about a depressing philosophical rat) and The Infirm (about a struggle lawyer). He combined elements of both strips to make Pearls Before Swine. Several syndicates liked it, but weren't sure if it was marketable. However, United Media decided to put the strip on the Internet and see what kind of buzz it would make. Scott Adams (creator of Dilbert and fan of the strip) showed his fans the strip, which sparked enough interest for the strip to be published.
Characters

The title comes from Matthew 7:6, where Jesus says "Neither cast ye your pearls before swine". In the context of this comic, Rat thinks he is the wisdom being wasted on "the swine" (Pig).

Plot
The X-Men (Marvel Girl, Cyclops, Iceman and Angel) and Havok and Lorna Dane are sent to an island to find a mutant, but all of them (save Cyclops) disappear. So, Cyclops told Professor X what happened. Prof. X gathered Storm, Nightcrawler, Bashee, Sunfire, Wolverine, Colossus and Thunderbird to save the X-Men. The team discover that the mutant that the first group looked for wasn't on the island. He is the island and feeds on mutants. So, the old and new X-Men gang up him and launch him into space.
Legacy
The mutants Xavier gather would later become the second generation of X-Men.
References:
http://en.wikipedia.org/wiki/Gaint-Size_X-Men
The Essential X-Men
Posted by Skippy at 5:09 PM No comments: 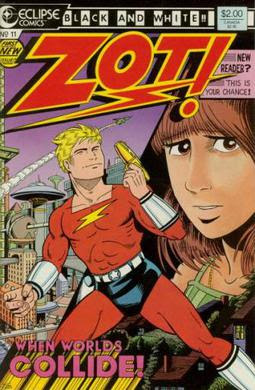 1-10: Jenny Weaver, a lonely girl, meets Zot, who is trying to stop robots who what to get a special key. The duo, after some chaos, discover that Sirius IV, a theocratic tyrant, is trying to steal the key and go to his world. Only to discover he was planning to use this an excuse for a holy war against Earth. The duo trick Sirius to gloat about his plan... on live television, leading to a revolt against him.
11-27: Zot had to battle a series of villains.
28-36: This story arch focuses on characterization and end with a cliff hanger where the characters are going to Zot's home.
10 1/2 and 14 1/2- Non-cannon back-up stories where stick figure versions of the characters are in absurd and surreal situations.
References:
http://en.wikipedia.org/wiki/Zot!
Posted by Skippy at 1:34 PM No comments:

I am going to talk about a comic strip as oppose to a comic character. Gnorm Gnat was created by Jim Davis, but he failed to get the strip published. However, his mistakes here led to his more successful creation of Garfield.
History
While working with Tom Ryan on the Tumbleweeds strip, Davis saw the possibilities of humor with insect characters. However, he failed to get it published. One editor said that despite his good gags and art "nobody can relate to bugs!" (although it's argued that The Far Side [which has many insect jokes] has disproved this). Jim literally killed off Gnorm via getting stepped on. Then, Davis went to create Garfield.
Characters
In 20 Years & Still Kicking!: Garfield's Twentieth Anniversary Collection, Davis explained about what the characters were intended to be like:
References:
http://en.wikipedia.org/wiki/Gnorm_Gnat
Posted by Skippy at 5:16 AM No comments:

You are probably thinking some to the effect of "why is Skippy talking about '80s cartoon characters on a comic blog?" Well, that cartoon series was based on a Belgian comic.
History
The soon-to-be creators of the Smurfs were having dinner together. However, Andre (one of the creators) forgot the word "salt" and asked for "schtroumpf" (I think it means something to effect of "thingamajig"). This inspired them to introduce a tribe of small, blue elves called that in their sword and sorcery comic Johan et Pirlouit. The character proved popular enough to their own stories and later comic. In Dutch, they were called the Smurfs, which was adopted by English speakers.
The Smurfs and their Culture
The Smurfs are small blue, look-like, 3-crab apple-tall beings. Despite looking very much alike, they usually have at least one notable characteristic that they were named after. They appear to age much slower than human as most of them are 100 years old. Most of the Smurfs are male, with extremely few females.
Their language is usually what ever language the comic is translated into, but they have a tendency of using the word "Smurf" for multiple meanings aside from referring to themselves, making it somewhat hard to understand them.
Their village is located in forest and they live in small mushroom houses. Despite the fact humans live near the forest, it is difficult (if not impossible) to find the village.
The Smurfs don't use money, but have a cooperative economy, where each Smurf does a job in society and get necessities of life in return.
References:
http://en.wikipedia.org/wiki/Smurf
Posted by Skippy at 1:06 PM No comments:

History
EC Comics started out as Educational Comics and was founded by Max Gaines. However upon Max's death, his son, William Gaines, took over and renamed it Entertaining Comics. While publishing a variety of comics, the most well-known were his horror comics: Tales from the Crypt, The Vault of Horror and The Haunt of Fear. These comics had gruesome and ironic tales told by horror hosts. Mad became popular around the same time. Due to the backlash against comic books at the time period, the comic code authority was formed. However, its rules killed off the 3 horror comics. Bill would later clash with the code several times. One notable incident involved a story called "Judgement Day", in which an astronaut doesn't want a robot-populated planet to join the Galactic Republic, because the robots' practice of segregation. The code wouldn't approve this because the main character was black. But, Bill still ran the story. Later, the company would focus solely on Mad, even when it's editor quit due to him not getting enough control of the creative process. Later, Bill made money off of licensing his famous horror comics.
References:
http://en.wikipedia.org/wiki/EC_Comics
Posted by Skippy at 5:43 AM No comments: 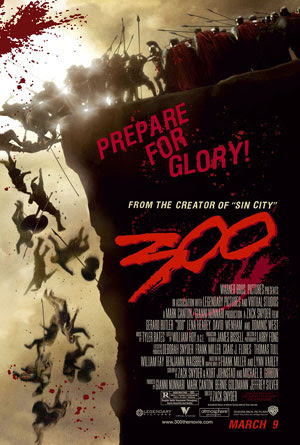 Poster for the movie
300 is a comic book mini-series done by Frank Miller. It was later adapted into the film of the same name.
Plot
King Leonidas of Sparta gathered his 300 best men (hence the name) to stop a Persian invasion force despite being outnumbered. The deformed Ephialtes wanted to join, but due to his inability to lift his shield correctly (which would ruin their phalanx) was rejected. For two days and nights, the Spartans held off the Persians. After he failed to sway Leonidas to his side, the Persian king met with Ephialtes, who revealed to him a secret pass that would allow them to ambush the Spartans, which they do. So, the Spartans forced Dilios (a trusted aide) to leave, so he can tell their story. Despite being offered the chance to surrender (and have all his men alive), Leonidas goes on fighting, leading all the Spartans into getting killed. Later, Dilios told his troops about the story prior to the Battle of Plataea.
Criticism
Both the movie and comic have criticized for egregious historical inaccuracy and the offensive way the so-called "Persians" were portrayed.
References:
Wikipedia

Posted by Skippy at 7:50 AM No comments: