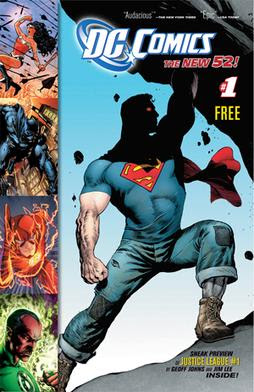 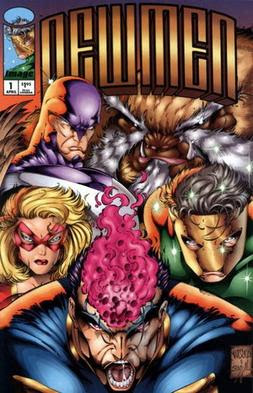 The New Men were an Image Comic team created by Rob Liefield that extreme similarities to the X-Men. The New Men got their powers from the Nu-Gene (X-Gene rip off). The original team consisted of the leader Reign (Cyclops) who had telekinetic (that manifest like Cyclops' eye blasts) and telepathy abilities; Byrd (Angel) who had talons and wings; the teleporting Exit (who had the personality of Iceman); Kodiak (Beast), who could turn into a man-beast; and Dash, who was super fast. John Proctor (a rip off the Chief from the Doom Patrol) mentored them, who turned out he actually was working for the aliens that created the Nu-Gene (called the Keep) and wanted to "harvest" the people with it for the aliens. Later, two "old" members rejoined Narcisse (a vampire) and Dusk. Also, Pilot (Bishop knock-off), who from the future, joined them to stop the Keep, but didn't tell them about the Keep; and so did Bootleg (Jubilee and Mimic), who could copy people's "powers". In Extreme Destroyer, the New Men discover the turth of the Nu-Gene and Proctor. After defeating the Keep and getting a new member Sundance, they disbanded... only to come together later. My sources were Wikipedia pages "New Men (Image Comics)" and "Bootleg (comics.)"
Posted by Skippy at 6:58 AM No comments:

Zinnak and Yoof were two alien college student on Earth heroes. To aid their study, they send out Extreme Enhancement Modules (or EEM for short) that when open give the receiver powers. They wanted to give one to a lawyer named Martian Lewis, but, not know that in phone book last names first are printed first, they give to a slacker Lou Martian. He gains super strength and intelligence, but can only use the latter when he concentrate. His powers prove to be a burden: Lauren Isley, her cat, Val Andrist, Gecko and Franic Dutton (all of whom (including the cat) got powers via EEMs) bug him and try to make him the leader of their team (which he doesn't want to do); and his EEM cause him to attract trouble like villains such as Tyrannosauruas Reich and Nunzio. Lou really just wants to sleep, eat and play video games, but finds himself unwilling caught in bizarre and impossible adventures. My sources were Comicvine and Wikipedia.
Posted by Skippy at 5:02 PM No comments: 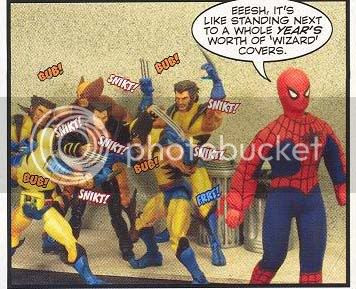 Twisted ToyFare Theatre is a humor strip in ToyFare magazine. The strip consists of pictures of Megos (a line of toys). Often, these Megos are used to parody pop culture.

Megos are based on other forms of media like Marvel Comics, Star Trek and Star Wars. Most of the Megos in this are based on Marvel superheroes. The characters are mostly caricatures of the original characters. For example, Iron Man is comedic drunk, the Gobots are Transformer wannabes and the Defenders are a pathetic superhero team and do menial tasks. The strip often has Robot Chicken-style humor (in fact ToyFare is written by people that worked on Robot Chicken).
My sources are the Wikipedia pages "Twisted Toyfare Theatre" and "ToyFare"
Posted by Skippy at 5:08 AM No comments: 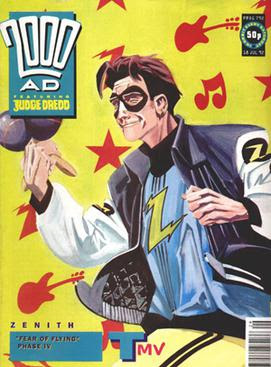 Zenith is the first superhero Grant Morrison ever wrote.

Character Overview
Robert Neal Cassady McDowell is selfish and spoiled pop star. He is the son of two members of Cloud 9 (a British military superhero team turn into hippies). As such, he has super powers. However due to his biorhythm cycle, these powers only work sometimes. In order for him to do anything heroic, he has to be forced by Peter St. John (a former member of Cloud 9).
Powers
His main powers are super strength, flight and invulnerability. He also has limited telepathy and fire manipulation, but he lacks the discipline to use these two. As mentioned before, his powers sometime works, but sometimes not.
References:
My sources were Wikipedia and Comicvine.
Posted by Skippy at 1:32 PM No comments: 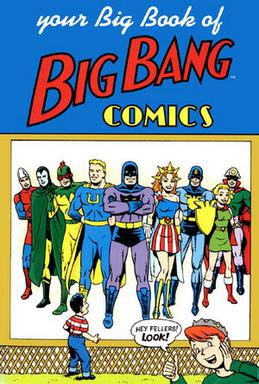 Big Bang Comics was comic that homage the Golden and Silver Age of Comic Books. The comic was originally published Caliber Comics. The series was cancelled and picked up by Image Comics. Now, the comic is independently published. The characters for the series are homages to various Golden Age and Silver Age superheroes. The Silver Age stories took place on Earth-A, but the Golden Age stories took place on Earth B. Some characters of note are Ultiman (Superman homage), Knight Watchman (Batman) and Dr. Weird (Mr. Justice). A notable feature of Big Bang Comics is its use of metaficiton. In the Big Bang universe, there are several imprints (that in reality never existed) that published the characters. This was used to give add more depth and development to the series' characters.
Posted by Skippy at 6:48 PM No comments:

The team first appeared in Justice League Quarterly # 1. Claire Montgomery, ex-wife of Maxwell Lord, formed the corporate superhero team the Conglomerate to rival the Justice League International (see my "Justice League" post for more info). The first team consisted of the leader Booster Gold (who recently quit the JLI), Gypsy, Reverb, Vapor, Echo, Maxi-Man and Praxis. Despite initial hostile, they became friendly with JLI. However, the team drifted apart. However, the team was suppose to have a competition with the JLI. So, Claire used Norman the Doorman (who has dimension-related powers) to get members new members: Slipstream, Scarab, Elasti-Man, Frostbite, Fiero and Deadeye. They turned out to be villains from the antimatter world of Qward. The Justice League ended up having to stop them. The most recent version was led by Templar, a British superhero. This team consisted of Reverb (now using the alias of Hardline), Nuklon, Jesse Quick and Echo. Their current status is unknown. My source was Wikiepdia and the image is from Comicvine.
Posted by Skippy at 5:06 PM No comments:

Hi. I just bought and read Justice League # 1, which the first comic for new 2011 DC Comic Reboot or "The New 52". So, I decided to review it. This was written by Geoff Johns, pencilled by Jim Lee, inked by Scott Willaim, colored by Alex Sinclair and lettered by Patrik Brosseau.

The comic starts off with Batman chasing a guy with a mouth full of fire. He meets Green Lantern and they try to figure why aliens are bombing Gotham.

I bought this for $4.99. That is TOO MUCH. 90% of this comic is Batman and Green Lantern yelling at each other and neither of them are all that likable. Despite Aquaman, Wonder Woman, Superman, Green Lantern, Batman, Flash and Cyborg being on the cover, only Batman, Green Lantern, Superman and Cyborg at in and the latter two have cameos. Also, every 2 or 4 pages there is an ad for another comic coming out in"The New 52". Despite the fact Jim Lee is a talented artist, the art here is average at best. The only interesting was a kamikazee alien yelled "FOR DARKSEID!". I give this a 2 out of 5.