Led by the most powerful humanoid in the Galaxy, the Shi'ar Imperial Guard is one team you don't want to mess with. The Imperial Guard is an "elite corps" that has sworn complete loyalty to the ruler of the empire. They helped the mad Emperor D' Ken in his plot to harness the power of the M' Krann Crystal (unknown to them the process would destroy the universe) by battling the X-Men and trying to kill D' Ken's rebellious and good sister, Lilandra. But when she took power, they switch their loyalty to her. The original team were homages to the Legion of Super Heroes. Gladiator (the leader) could fly at super speed, lift over 100 tons, virtually invincible (but some forms of radiation weaken him), has "laser-vision" and doesn't need to breathe for long periods of time. He was based on Mon-El. The other members were phasing Astra (Phantom Girl), the electricity controlling Electron (Cosmic Boy), the super-sensed Fang (Timber Wolf), the shape-shifting Hobgoblin a.k.a Shape-Shifter (Chameleon Boy), the energy-firing Impulse (Wildfire), sorceress Magic a.k.a Magique (Projectra), the super smart Mentor (Brainiac 5), the shrinking Midget a.k.a Scintilla (Shrinking Violet), darkness-controlling Nightside (Shadow Lass), the telepathic Oracle a.k.a. Sibyl (Saturn Girl), the super strong Quasar a.k.a. Neutron (Star Boy), the super strong Smasher (Ultra Boy), the energy-bolt-firing Starbolt (Sun Boy), the electric-bolt-generating Tempest a.k.a. Flashfire (Lightning Lad) and the super-growing Titan (Colossal Boy). Later, non-homage members Manta (create light), Earthquake ("psionically creates Earthquakes"), Warstar (super strong) and Hussar (has a "Neuro whip") joined.
References:
http://www.mykey3000.com/cosmicteams/legion/docs/fanfare.html
http://upload.wikimedia.org/wikipedia/en/f/f1/Imperialguardwiki.jpg
X-Men Ultimate Guide
Posted by Skippy at 6:49 AM No comments: 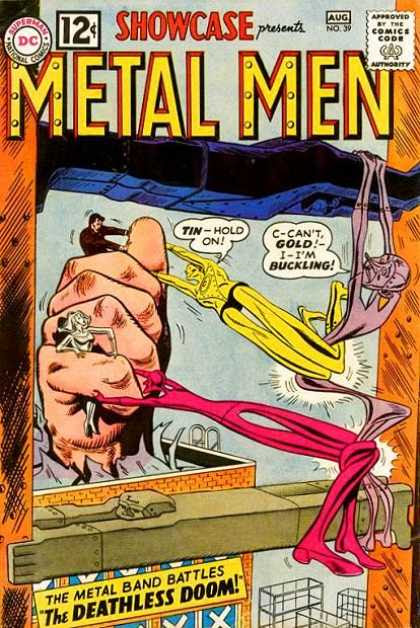 Will Magnus (with the help of Thomas Oscar Morrow) created small computer-like spheres called "Responsomemter" that turn 6 human-shape metal robots into animated shape shifters. They each had different powers (with their shape-shifting powers they all had) and personalities based on there type of metal: the field leader Gold could stretch his body into infinity; the strong man Iron was super strong; slow-witted and loyal Lead could block radiation (usually by turning into a shield); the insecure Tin broke easily; the hot headed Mercury could melt and reform himself (due to being liquid at room temperature); and Platinum (acted like a "real" woman and was in love with Doc Magnus) could flatten and stretch herself (usually into coils). However although in their second appearance it said they had their personalities because the "Responsomemter" were exposed to "intense Aurora Borealis activity", but Tin and Platinum made robots with their own personalities that had unexposed "Responsomemter". Tin made a female tin-robot (roughly with the same personality) that he called "Beautiful", but everyone else called her "Nameless". Their foes included the Missile Men (Missile robots), B.O.L.T.S. (a giant robot with loads of built-in weapons) and Uranium (a rouge Metal Men-prototype) However later due to complains about too many robot foes, the Metal Men seek out more human foes, but mostly just got plastic robots. In Metal Men issue 32, "Nameless" made her last appearance. Later, the Metal Men get up-grades that cause feedback sending him into a coma, while the MM were hunted. But, they were saved by Doc's brother Col. David Mangus (but humanity still distrust them). However they are seemly destroyed, when really it faked by Mr. Conan (first name unknown) and he and Dr. Peter Pygmalion help them make fake identities as humans. Eventually, Doc (who was an insane criminal) gets his sanity back thanks to Metal Men. However, most of events of human distrusting were erased because of Crisis on Infinite Earths.
References:
http://en.wikipedia.org/wiki/Metal_Men
http://www.dccomics.com/dcu/heroes_and_villains/?hv=origin_stories/metal_men&p=1
http://www.dccomics.com/dcu/heroes_and_villains/?hv=origin_stories/metal_men&p=2
http://www.rci.rutgers.edu/~cje/mh/ME/metal.html
http://www.coverbrowser.com/image/showcase/39-1.jpg
Showcase Present Metal Men
Posted by Skippy at 6:11 PM No comments: 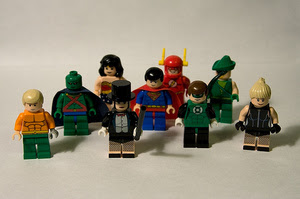 A evil, starfish-shaped alien called Starro the Conqueror (that could create mini-mind-controlling clones of himself) wanted to conquer the world! So Aquaman, the Flash II (Barry Allen), Batman, Superman, Wonder Woman, the Green Lantern II (Hal Jordon) and Martian Manhunter joined forces and stopped Starro. They decided to become a team, because they defeated Starro so well. Eventually, Green Arrow, Atom II and Hawkman joined. Their base was a hidden cave at Happy Habor, Rhode Island. Snapper Carr was their "boy sidekick", but the Joker trick him into revealing were the JLA base was, causing a resignation where Wonder Woman and Martain Manhunter left the team.
Satellite Years

After the "Snapper incident", the JLA got a satellite base. Black Canary II, Phantom Stranger, Elongated Man, Red Tornado II, Hawkwoman, Zatanna and Firestorm all joined. Wonder Woman returned. However this incarnation was short-lived.
Justice League of ... Detroit?!

An extremely short-lived version of the team was based on Detroit and were called the "Justice League of Detroit". Members were Aquaman, Zatanna, Martain Manhunter and Elongated Man. However, Vixen, Gypsy, Steel and Vibe were unofficial members.
Justice League International

Another, JLA team was formed. Members were all of the original members (see: Silver Age) and they were based on the moon. This version of the team only dealt with world crisiss and not minor crime like petty crooks (such as Captain Cold and Rainbow Raider).
52

During the events of 52, Firestorm formed his own version of the team that included himself, Ambush Bug, Bulleteer and Super-Chief.
Modern

http://en.wikipedia.org/wiki/Justice_League.jphttp://www.wired.com/images_blogs/geekdad/images/2008/01/18/legojla.jpg
Justice League Ultimate Guide
Posted by Skippy at 5:58 AM No comments:

By reading the Metal Men you learn about the properties of lead, gold, tin, platinum, mercury and iron, but have you ever wonder about the other metals. For some reason for comic books to be mailed they had to have stuff beyond the story. So DC comic had "educational" facts pages. For the Metal Men, they had Metal Facts and Fancies. At first it talked about lead, gold, tin, platinum, mercury and iron-related facts. Then it talked about other metals. Eventually some of these metal got their own "robots". The notable ones were:

This stopped at Metal Men issue 16.

Posted by Skippy at 2:59 PM No comments: 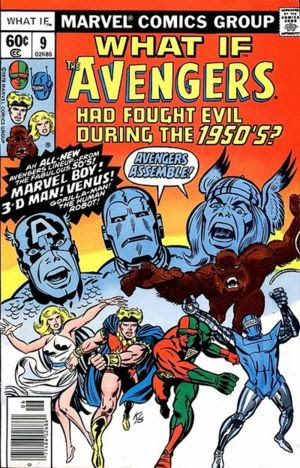 What if the Spider Man joined the Fantastic Four? Or what would happen if Doctor Strange worked for the evil demon Dormammu? What events would unfold if the Hulk had Bruce's intelligence? Stan Lee and the rest of the Marvel talents dicided to answer that.
In What If...? (officially copyrighted as What If) vol. 1, Utau the Watcher (a cosmic being that lives on the moon) narrated what would have happen if events took a different turn then they did by showing the reader alternate realities. Such as, issue X might have "What if Blob joined the X-men?" or "What if Reed Richard became the Thing?". The series proved so popular Marvel created eight volumes of it!
References:

Main Characters in "the Watchmen" 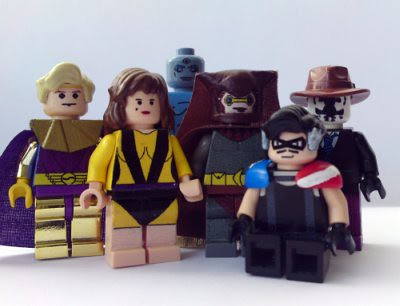 The main characters in the Watchmen are (from left to right):

Posted by Skippy at 5:47 AM No comments:

What if the sinister

aliens took over the Galaxy? All the Pluvians (people from Pluto) were covered in crystalline facets. This allowed them to survived in extreme temperatures. Martinex was a technician and scientist that cold emit cold and hotness from his hands. An alien race called the Badoons killed all the Pluvians expect him. Along with other last-members-of-their-races Charlie-27 (from Jupiter), Yondu (Beta Centauri IV) and Vance Astro (from Earth), he founded the Guardians of the Galaxy. The double G rebelled against the-now-emperors-of-the-Galaxy Badoons. After stopping the Badoons with the help of 20th century heroes, Martinex and the rest of his team fought crime in the 20th century, until returning to their time.
References:
http://users.cwnet.com/xephyr/MICROS/GIFS/Martinex.gif
http://en.wikipedia.org/wiki/Martinex
Posted by Skippy at 11:51 AM No comments:

The Fin Fang Four were four monsters- Fin Fang Foom, Elektro (not Electro), Gorgilla and Godgam- that signed up to be hypnotized and "reshaped" so they could fit in society. Foom became a chef at the Baxter Building, Elektro became a mail man also at the Baxter Building, Gorgilla became a window wiper at guess where and Godgam become the B.B.'s parking attendant. But eventually they returned to their normal forms and teamed up to stop the now-gaint Tim Boo Baa. 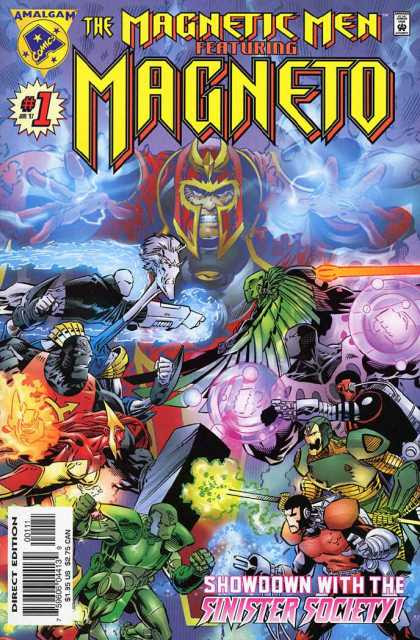 Horsemen of the Apocalypse

These foursome of evil were a powerful enemy to the X-Factor.

Posted by Skippy at 4:26 PM No comments: