One More Day was event in the Spiderman comics. It proved to near-universally panned.
The basic plot is that Aunt May is shot (the bullet was meant for Spiderman). So, Spiderman seeks the help of the greatest scientists in the Marvel Universe, who can't help a bullet wound. Mephisto (the Marvel stand-in for the devil) offers Spiderman to save Aunt May exchange for his marriage with Mary Jane and agrees on the ground the Mephisto will erase the memories of Spiderman revealing his identity.
This event was praised for it's art, but criticized for it's writing. I haven't read it, but I have a few questions: 1. Why can't the greatest scienists in the Marvel Universe mend to a bullet wound? 2. Why does Mephisto want their marriage and not their souls? 3) How can Mephisto do this? He never shown any powers remotely like this before.
My source was Wikipedia.
Posted by Skippy at 4:48 AM No comments:

The Society of Modern American Science Heroes (or SMASH for short) is a superhero team in the Tom Strong series. Each member is actually a Golden Age character that was owned by Nedor Comics, but fell into public domain. The team consisted of American Crusader, Black Terror, Cavalier, Fighting Yank I-II, Green Ghost, Liberator, Ms. Masque, Pyroman, the Scarab, Tom Strange, Tim Roland and The Woman in Red.


In this mythos, all of the original Nedor Comics story actually took place on an alternate Earth called "Terra Obsura". In the Silver Age, Tom meets the team for the first time. However, as soon as he leaves, Obsura gets attacked by a moon alien awakened by the moon landings. During the battle, Ghost, Black Terror and Tom Strong's sidkick, Mike Ellies, died and the rest of the team were put in stasis fields except for Tom Strange, who traveled 30 years into the future. 30 years later, in "Modern Age", Strange and Strong freed the team and they battle the alien (who was builting a base on Earth) with the aid of a computer Black Terror's sidekick, Tim Roland, made. Depsite defeating the alien, Fighting Yank died. During this time, Ghost turned into his name sake and re-named himself "Green Ghost". Unable to adapt to 21st century life, the team decided to disband. However, three years later a "technology plague" stated to turn tech useless and send Obsura back to the Dark Ages. The team re-united and discovered a person called Mystico and his plague so removes the powers of science-power heroes. So only the magic-powered Liberator and Scarab have their powers. After Ms. Masque de-active his powers, Tom Strange convinces Mystico to be a force for good. Years later, they meet Captain Future (another Nedor Comic hero) and have to battle the Terror 2004 (an evil version the before mentioned computer). However, a time-travelling version of Black Terror helped the team defeat it.


My source was wikipedia.
Posted by Skippy at 6:17 PM No comments:

The Doom's IV was a comic created by Image Comics that a tie-in to a movie based on the comic being made at the same time. They did a similar thing with Kick-Ass. The movie wasn't made due to Marvel complaining about Fantastic Four similarities (personally I think they are being nit-picky). I find it notable for have a 1/2 issue.
The series was about a group of renegade heroes called the "Doom's IV" battling the Doom's Corp. (which begs the question why the heroes have "Doom's" in their name) led by Syber Idol. The team consisted of Burn (who can generate flames from her hands), Slyder (able to phase through matter), Brick (who has sand-based abilities) and Grimm (who uses future weaponry).
My sources were http://www.atomicavenue.com/atomic/titleddetial.aspx?TitleID=3478, Atop The Fourth Wall episode "Doom's IV # 2" and "Doom's IV # 1/2".
Posted by Skippy at 11:47 AM No comments: 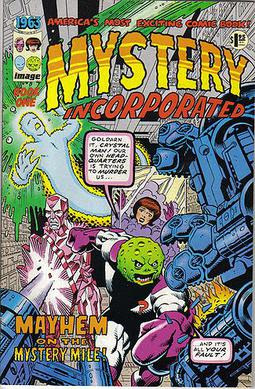 No. This is not talking about comics in 1963. I am talking about an Alan Moore series called 1963. He and Image Comics used it to spoof the Silver Age of Comics (roughly 1956 to 1970).
Each issue parodies  / homages a comic that Marvel (sometimes DC) made during the Silver Age. For example, issue 1 featured Mystery Incorporated (no connections to Scooby Doo), which parodied the Fantastic Four, while issue 2 featured the Fury (a parody of Spider-Man and Daredevil) and Sky Solo, Lady of L.A.S.E.R. (a female Nick Fury parody). The comic had in-jokes from Stan Lee-like pen names such as "Sturdy Steve", "Jaunty John" and "Affable Al" to make fun of business practices of the time. "Affable Al" is jerk that steals the credit for the creations of his employees and encourages people to buy his book How I Created Everything All By Myself and Why I Am Great (a parody of Stan Lee's Origins of Marvel Comics). The comic was intended to end with a "80-page giant", where the heroes of the comics go to the "future" of 1993 and discover how the Silver Age led to "grim and gritty"-style 90s comic, but this was never completed due to the creators going to other projects. My sources were Wikipedia.
Posted by Skippy at 7:51 PM No comments:

Guardians of the Globe

The first incarnation Guardians of the Globe appeared in Invincible # 7. This version was a parody / homage of the Justice League of America. The members were Darkwing (Batman parody), who is like Batman without the ears; Red Rush (Flash), a super fast Russian; the super strong War Woman (Wonder Woman), who may be a lesbian; Aquarus (Aquaman), who is more fish than man; Green Ghost (Green Lantern), who can phase and fly via a gem he appears to shallow; Martian Man (Maritan Manhunter), who can shapeshift and fly; and Black Samon and the Immortal (the only non-JLA parodies members). However, the dialogue suggests there was another Green Ghost who was a member. They were all sent to their based in Utah only to be killed by Omni-Man (a supporting character of the comic). Only Black Samon (who wasn't on duty at the time) and the Immortal (due to his powers) survived. Robert Kirkman (the writer) explained the reason for the JLA parodies was "I have 18 pages to introduce them and make readers care about them before I killed them. Using archetypes is the best way to that".

The next team was formed by the US government after the murder of the first. It was supervised by government agent Donald. The team consists of Dupli-Kate, Robot, Rex Splode from Teen Team; Black Samon from the original team; and new characters Monster Girl and Shrinking Ray. The team did poorly, leading to changes: Bulletproof and Immortal joined. Shortly, the Immortal became leader. Most of the team's most powerful members had to stop a martian invasion, while the members on Earth had to stop the Lizard Legion from taking over nukes. Soon, Dulti-Kate and Shrinking Ray died.
A parody ad "advertised" fictionally a Guardians of the Globe mini-series. However, a real series came out. The team started out with Brit, Yeti, Bulletproof, Outrun and Kaboomerang. However, El Chupacabra, Pegasus, Kid Thor, Japandroid, Cast Iron, Le Brusier, Best Tiger and Knockout joined as the series went on.
My sources were Wikipedia's page on the subject and Invincible volume 2 "Eight is Enough".
Posted by Skippy at 6:45 PM No comments: