History
Master Order and Lord Chaos are two "brother" entities that embodies their namesake and balance the other. They seem to be all-powerful and nearly all-knowing. The duo are rarely seen, but have several notable appearances. They manipulated Spider-Man into getting Warlock to battle the villain Thanos. They watched Odin and Dormammu play a "cosmic game of chess". The duo helped battle against the god-like Beyonder. Then, they imprisoned the In-Betweener (their servant turned evil). Later, they are seen at Eon's (another cosmic entity) funeral. In their most recent appearance, they (and other "abstract" cosmic entities) deemed Thanos unworthy of the Infinity Gauntlet and attacked him, but soon turn their attention on Nebula, when she got the gauntlet. They were seen witnessing Warlock's "cosmic trial" to see if he is worthy of the gaunlet.
References:
http://en.wikipedia.org/wiki/Master_ORder
http://en.wikipedia.org/wiki/Lord_Chaos_(MArvel_COmics)
Posted by Skippy at 3:51 PM No comments:

Above: Captain, Tabitha, Monica, Aaron and Elsa
This is my 200th post!

Overview
This series focuses on a group of B-list heroes: Monica Rambeau (former Captain Marvel), Tabitha Smith (former X-Force member), Aaron Stack (Machine Man), Elsa Bloodstone (a monster hunter) and the Captain (a new character, who used to be "Captain [censored]", the word is so vuglar Captain America once put soap in his mouth and threw him in a dumpster). The group joined the Highest Anti-Terrorism Effort (or H.A.T.E.) to stop the Unusual Weapons of Mass Destruction (U.W.M.D.s). However, they discovered a terrorist group called the Beyond Corporation was actually funding H.A.T.E. So, they stole a vehicle called the Shockwave Rider (which is bigger on the inside than the outside akin to the TARDIS from Doctor Who) and battled U.W.M.D.s and H.A.T.E., while being hunted by the leader of H.A.T.E., Dirk Anger (an over-the-top parody of Nick Fury).
The series tends to have story arcs lasting a mere two issues. The comic has extreme comedy and violence and shows flashbacks of various heroes acting out of character for comedic effect. It also parodies the superhero genre in general. Warren Ellis (the guy who wrote the series) stated "I took The Authority and I stripped out all the plots, logic, characters and sanity".
Cannon or Not
A confusing issue is whether the Nextwave takes place in the Marvel Universe or not. Ellis state concern wasn't due to the "harm" it would due to the continuity. However, Official Handbook of the Marvel Universe and Civil War: Battle Damage Report claimed otherwise. The Battle Damage Report claimed that the Nextwave's members might have had their memories and personalities altered by H.A.T.E.
References:
http://en.wikipedia.org/wiki/Nextwave
Posted by Skippy at 6:37 AM No comments: 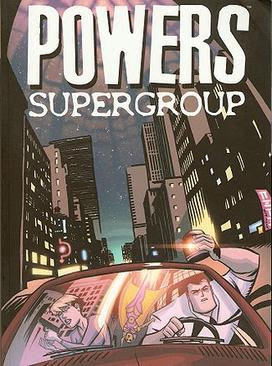 Overview
Powers is a police procedural comic with a science fiction twist. In a world, where superpowers are common, but not completely everyday, Christian Walker and Deena Pilgrim are police officers that deal with homicides that involving "powers" (a slang term for superhumans).
Walker used to be a "power" himself and was a superhero called "Diamond". However, he lost his abilities and became a police officer. Despite the latter, he still has contacts in the superhero community.
Deena Pilgrim, his partner, has a dark secret: she managed to get superpowers to battle a super villain called Bug, but this led her to accidentally kill her abusive boyfriend in self-defense and she hid the evidence. However, she manged to redeem herself later in the series.
Similar Series
Gotham Central focused on the cops in titular city and their interactions to superhumans.
Alan Moore's Top 10 was also about superpowered cops solving cases involving superhumans, which worried the creators of Powers. However, Moore said the series were different as Top 10 is about "superpowered cops" where as Powers is about cops that deal with superhumans.
References:
http://en.wikipedia.org/wiki/Powers_(comics)
Posted by Skippy at 1:08 PM No comments:

The titular character, Maxx, is a being who exist both in the "real" world and an alternate reality called the Outback. In the Outback, he is the the protector the Jungle Queen, but in the real world, he is a homeless man, who wears a purple superhero costume (see above). The Jungle Queen also has a "real world" counterpart named Julie Winters, who is a social worker that often bail Maxx out of prison. While Maxx is aware of both realities, Julie isn't.
Plot
In the first story arch, a serial killer Mr. Gone (who has a telepathic link to Julie) is constantly calling Julie, but she ignored him. The Maxx was protecting Julie, so Mr. Gone had to get help from the Isz, the main predators of the Outback. Mr. Gone reveal that he was once a friend of Julie's father; the Outback was actually controlled by her subconscious and other people have them; and Julie accidentally created a rip between the real world and the Outback causing the creation of Maxx. Julie started heal herself and her Outback. We meet a depressed teenager, Sarah, who doesn't want to be like her father, Mr. Gone.
In the second story arch, Julie and the former Maxx (whose name is revealed to be Dave) have disappeared, so this story arch focuses on Sarah. A giant yellow, slug monster called the Iago (who is from the Outback) came into the real world and has a list of people to kill... including Juile and Sarah. Sara (as she spells it now) was hounded by a homeless man named Norbert, who she realized is her "Maxx". Julie and Dave resurfaced to battled the Iago. Norbert, Sara, Dave, Mr. Gone and Mark (Julie's son) try to stop the Iago, who kidnapped Juile and went into Sara's Outback and save her. Mr. Gone reveal time is running out for the group. Then, they are reborn into a new reality. In this new reality, Mr. Gone is a professor and Dave is a janitor at the same school. It's implied despite living completely different lives, they still have connections to the Outback and each other.
References:
http://en.wikipedia.org/wiki/The_Maxx
Posted by Skippy at 4:18 AM No comments:


In a near-future, America became a tyrannical, fascist state. Harry Barnes' wife was murdered and he was on the run from the police. He met Citizen X (the leader of an underground anarchist group), who trained him to be a master of the "para-sciences" giving him super powers. Using these powers and a variety of weapons, he became the defender of middle class people, oppressed by the fascist police forces and the greedy rich people.


He has super strength, speed, stamina, reflexes, agility, durability and equilibrium. While not completely invulnerable, most weapons cannot harm him. He can alter his shape and molecular structure and turn back at will.


References:
http://en.wikipedia.org/wiki/Trashman_(comics)
Posted by Skippy at 7:48 AM No comments: 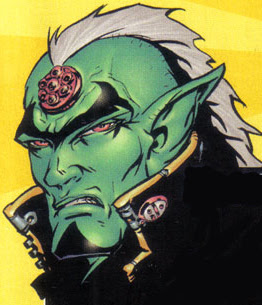 Overview
Thrag the Mighty or Mighty Thang is the fictional editor of the real British science fiction comic 2000 AD. However, he usually appears in his own strip and rarely appears in the actual stories. Thrag is an egoistic tyrant from the also fictional planet Quaxxann that orbits the real-life star Betelgeuse, but works in Britain. Unlike most stereotypical aliens, he refers to humans as "Earthlets" as oppose to "Earthlings". He abuses his droids (robot caricatures of the real-life staff) that work on the comic and destroys them when they displease him. His favorite "food" is polystyrene cups. Although he speaks perfect English, he peppers his speech with "Betelgusian" phrases. He often battles the parasitical "Thrill Suckers" (who try to steal the comic's thrill powers) and the Dictators of Zrag (who try to take over the comic to liven up their dull planet and are constantly used as scapegoats by Tharg).
Catchphrases

References
http://en.wikipedia.org/wiki/Tharg_the_Mighty
Posted by Skippy at 3:43 PM No comments:

Kingdom Come
Magog first appeared as an antagonist in the series Kingdom Come. He killed the Joker causing the public to praise him as a hero. This caused Superman (who disliked Magog's methods) to withdraw from the world. During Superman's exile, superhumans become more violent like Magog. At an unknown time, Magog formed the Justice Battalion. They battled Parasite, which led to him literately tear Captain Atom apart, causing him to explode like a A-Bomb, with Alloy and Magog being the only survivors. This lead Superman to return from his exile and reform the Justice League. They found that Magog was sorry for what he has done and was traumatized. He was sent to a superhuman prison and spent most of his time in his cell. When the rogue superhumans were freed and battled the JLA, Magog avoid fighting and tried to save as many lives as he can. At the end of the series, he has decided to retire to Paradise Island. Note these events take place on Earth-22 and are non-cannon.
Justice Society of America
Introduced into the main continuity, this version of Magog was once Lance Corporal David Reid and fought in the War of Iraq. He touched a "stone fragment of the Old God Gog", which filled his body with plasma energy, but ruin his left arm. He would later gain a lance-shaped device that allowed him to control it. He was allowed to join the JSA, because he is the great-grandson of Frank D. Roosevelt. They helped a person known as Gog fight against a rogue military attack. Gog turned Magog's right eye and ruined armed to gold. It turns out that Gog was actually evil and the Society turns on him with Magog killing him. Magog left to join his family farm. He rejoined the team, but clashed with the other members due to his military personality.

JSA All-Stars
He quit the JSA again and joined a team called the All-Stars, which was composed of mostly younger heroes.

Solo Series
Magog got his own series. In the first story arch, he battled against the Flashpoint, a mysterious weapon making group run by D. P.Macklin. This series also fleshed out the character some more in various ways such as his origin and new rogue gallery. Macklin framed Magog and (even though he cleared his name) he got kicked out of the All-Stars. Magog discovered the Cult of Gog was manipulating him and he seemly died stopping them. But, it later seen alive.

Magog tried (and failed) to capture Captain Atom, who was framed by a telepathic Maxwell Lord. Maxwell Lord met a being known as the Entity, who revealed that Magog could cause a war among Earth's superhumans (akin to Kingdom Come). After Magog tracked down Captain Atom, Atom manged to convince Magog that Lord was manipulating him. Lord (unhappy about this) killed Magog, but used his powers to make it seem like that Atom did it.
Powers
Magog's body is full of plasma energy that he controls via his staff. He has super strength and durability (he was seen surviving a nuke). He can fly. He was once seen being able to teleport people, but this power has not been seen after he killed Gog. He is able to use various forms of super-vision in his "blind" eye. According to Keith Griffen (who wrote his solo series), he actually has more power than he knows about.

References:
http://en.wikipedia.org/wiki/Magog_(comics)
Posted by Skippy at 4:51 AM No comments: 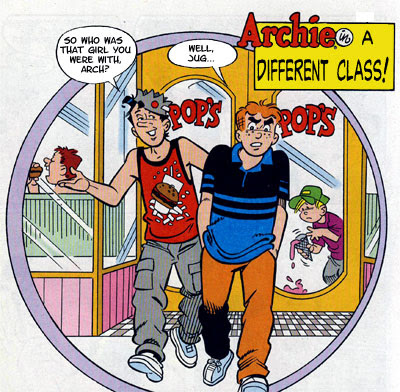 Archie (above) and the gang are still teens despite the fact in real time they would be on retirement funds.
Concept
A floating timeline is an excused in pieces of fiction such as comics to explain why they don't age as much as they should. In a FT, events are changed so they happen more recently. For example, in a FT, if a comics says "10 years ago", it actually means "10 prior to you reading this". So, this is how come characters in lets say the Peanuts for example stay young even through the strip ran for 50 years. However, despite the characters not changing, technology and tends may change.
Comic Book Examples

Posted by Skippy at 1:30 PM No comments: