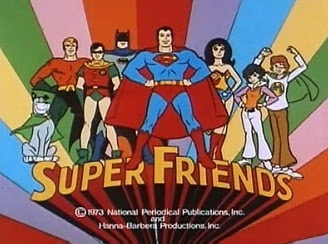 This is one of the most hated comic-related topics ever: The Super Friends!

Television Shows
Super Friends
The Super Friends was a stupid kiddie version of the Justice League created by Hanna-Barbera. The name of the series made no sense, since the team was referred to as the Justice League. The line-up included Superman, Wonder Woman, Batman, Aquaman and three new characters: Marvin, Wendy and Wonder Dog (who were non-powered kids and their dog that were complete rip-offs of Scooby Doo). Despite being super heroes, the team almost never used force against their foes. The battles were limited to lassoing people and battling "non-living threats" (ex: robot). Their "enemies" were misguided individuals that were doing bad things for good reasons and the SF had to talk them into changing their ways. They had Ted Knight as a superfluous narrator. Also, in between the segment were shorts showing kids health tips and how to make crafts, that I think were superfluous as well. This show did not last long.
All New Super Friends Hour
This version had been split into four segments. The second segment would feature the alien teen duo: the Wonder Twins (Jayna able to turn into any animal and Zan able to turn into any form of water (ice, gas, liquid)). The duo had an annoying space monkey called Gleek. Also, Marvin, Wendy and Wonder Dog got kicked out of the roster (the Wonder Twins were intended to be their replacements). To diversify the team, several new characters were added: Black Vulcan (a rip off of Black Lightning), an African American with electric abilities; the Asian Samurai, who could use magic-like abilities via saying a Japanese phrase for each power; the Native American Apache Chief (the most well-known), able to increase his size via saying "Inyuk-chuk"; and the Tarzan-esque Rima the Jungle Girl. These new characters were all somewhat stereotypical.
Challenge of the Super Friends
The Super Friends (sadly) lived on. Despite this actually being part of a revamped All New Super Friend Hour, due to the fact it had it's own title sequence, people mistook it for an all new show. Finally, the Super Friends actually fought villains, but the violence was still toned down. Also, the Legion of Doom became the arch-enemies of the Super Friends. The members were Lex Luthor (leader), the super smart Brainiac (who was pantless) and the imperfect Bizzaro (enemies of Superman); the zombie Solomon Grundyand yellow power-ring wielding Sinestro (Green Lantern foes); Black Manta (enemy of Aquaman); the riddle-obsessed Riddler and the fear-obsessed Scarecrow (enemies of Batman); Captain Cold and the super-genius Gorilla Grodd (enemies of the Flash); the size-increasing Giganta and the beautiful-but-deadly Cheetah (Wonder Woman foes and the only female members) and Toyman (enemy of both Superman and Batman). They were based in a hidden swamp base (that looked somewhat like Darth Vader's helmet). Also, they always had an escape plan, so they could come back next Saturday and try (and fail) to kill the SF.
The World's Greatest Super Friends
The show was revamped again (ugh...). This show was lame even to the Super Friends' expectations. The Legion of Doom and most of the extra characters (except the Wonder Twins) were sent to the unemployment line. This series simply ripped off of any popular fiction at the time. The most notable example was The Lord of Middle Earth episode (Lord of the Rings rip off), where the Super Friends go to Middle Earth. Due to the complete lack of originality, the show sunk.
Super Friends II
The show's creators decided to revamp the show and call it Super Friends again. Here, the writer actually came up with their own stories and introduced a Latino hero, El Dorado (who was somewhat stereotypical). The show was canceled due to a writer's strike (maybe they though it was too hard to actually be original for once).
Super Friends: The Legendary Power Show
Despite the strike, this came into a nightmarish reality. The many of the abandoned ethic heroes came back and the pre-existing, molecule controlling Firestorm joined. Darkseid (the main antagonist of the Fourth World saga) became the main villain. The show was renamed Super Power Team: Galactic Guardians and reluctant superhero Cyborg (well known for being a member of the Teen Titans), who on the show was a friend of Firestorm, became a member. This would be the final chapter of the Super Friends... Woo Hoo!
Reaction
Most people found the Super Friends more annoying and stupid than entertaining (especially the Wonder Twins) and (as such) the team has been a target for parody. The parodying is also supported by the team's oddities and seemingly uselessness. Fans of Aquaman were especially mad, because although in the first series he displayed super strenght and various other power, but, in the other series he only displayed his underwater breathing and sea-life telepathy, enforcing the weak image of the character. So, they accused the Super Friends of making Aquaman a laughable and unpopular character (which is not completely off).
References:
http://www.youtube.com/user/PatchOBlack#p/c/DF447047E3E3DED6/3/DU8nT-fT98s
http://www.youtube.com/user/PatchOBlack#p/c/DF447047E3E3DED6/4/SFaX7v5p7LQ
http://www.youtube.com/user/PatchOBlack#p/c/DF447047E3E3DED6/5/W9L-ddvs8c4
http://en.wikipedia.org/wiki/Aquaman_in_popular_media
http://upload.wikimedia.org/wikipedia/en/c/c0/Super_Friends.jpg
Posted by Skippy at 2:58 PM No comments:

He is both a hero and a villain!
Bruce Gordon
Bruce (unconnected to the other 50 billion other comic characters named that) was in a jungle to view a solar eclipse, but an evil witch doctor attacked him and fell off a cliff. But before doing so, he managed cut Bruce with a black diamond. This cause it so when ever there was an eclipse, the rightmost two-thirds of Bruce's face would be covered by a blue-grey or purple and he would turn into the evil Eclipso. As Eclipso, Bruce had generic superpowers: super strength and near-invulnerability. He could also fire "beams of black light" via his black diamond. In House of Secrets, he Dr. Jekyll and Mr. Hyde-like misadventures. Eclipso could, later, come out during solar and lunar eclipse, or any object blocking a source light. However, a bright flash of light would turn him back into Bruce.
The Darkness Within
Eclispo was retconned as a demon that was trapped in a giant black diamond called the Heart of Darkness. But in the 19th century, the diamond was made into smaller diamonds and Eclispo could possesses any one that got mad and had a piece of one of the diamond. Notably, he didn't need an eclipse and mere pretended to be Bruce's evil half. During the next century, he got all of the diamonds and planned to destroy them (on his moon base), but decided to use them to mind control the Earth's heroes. He explained he picked on Bruce because of his solar research (Eclispo is weakened by light). At the climax of The Darkness Within storyline, Bruce led an army of heroes to stop Eclispo. Eclispo absorbed the possessed heroes, but the fifth Starman destroyed Eclispo's base (freeing them) and the diamonds were still on Earth.
Solo Series
Eclispo decided to take over the country Parador one person at a time. Bruce Gordon, Cave Carson and Mona Bennet (Bruce's fiance) were sent to invested (although CC was left at the border due to breaking his legs). Various heroes tried to stop him. But when it looked like Eclipso won, it turned out the Phantom Stranger had all the diamonds and fused them back into one big diamond, trapping Eclispo again.
Spectre
The Spectre series revealed Eclispo was an embodiment of God's wrath. But, he got replaced by the titular character. While the Spectres wants to avenge, Ecilpso wants revenge. It was also revealed Eclispo caused the Great Flood from the Bible. The Spectre used the holy power of God to burn the Heart of Darkness and Eclipso's base to ashes. However he appears in Countdown to Mystery, where possess several heroes to get them to fix the Heart of Darkness. Crispus Allen (the Spectre's newest host) tracked down Bruce. Bruce is later possessed by Eclispo, but later gains control over him, but they can't split up.
Alex Montez
Eclipso became an ally to shadow-themed heroes. Alex, mad about his sister's death (caused by Eclispo), melted the pieces of the Heart of Darkness (how it got broken again is unknown), but one, and injects them into himself and used magic tattoos, so when he got angry, despite having Eclispo's powers, he was still in control. He joined Black Adam's loose cannon hero team. During Black's rule in Kahndaq, he fell in love with the female Nemesis, but one of the tattoos are broken and Eclipso took over Alex and killed Nemesis. Alex killed himself, so Eclipso wouldn't control him. Now, Eclipso didn't have a limitless supply of his diamonds. Oddly, Alex never was seen using Eclipso's eye blasts. Alex is brought back to life via magic and the Heart of Darkness was fixed.
Lightning Strikes Twice
Despite the lost of many of the diamonds, Eclipso tried to take over Superman and managed to do so. The wizard Shazam battled the Eclipso-corrupt Superman. Captain Marvel managed to do damage to Eclipso (due to Superman's magic weakness) and shoot him with lightning. Shazam sucked Eclipso into his diamond. The diamond was later seen in the Arkham Asylum with the Atom's insane ex-wife, Jean Loring.
Jean Loring
Naturally, Jean became Eclipso's new host. She tricked the Spectre to attack magic-using heroes. Nightshade launched her into the orbit of the sun. Alexander Luthor, Jr. got Superboy-Prime to get the diamond and manipulated Eclipso into manipulating Spectre. Jean was trapped in a time loop thanks to Spectre, but is freed by Eclipso and possessed her, only to be launched back into space. After possessing other heroes and Jean was declared dead, Eclipso returned to Bruce.
Reference:
http://en.wikipedia.org/wiki/Eclipso
http://www.cosmicteams.com/microheroes/villains/eclipso.gif
Posted by Skippy at 7:03 AM No comments: