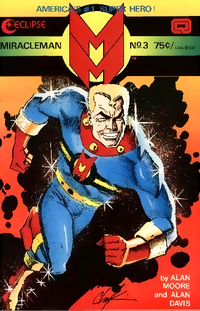 The creators of Captain Marvel was sued by DC Comics for "copying" Superman. So, in Britain, Mick Anglo created a rip-off called Marvelman. Marvelman was cut and paste Captain Marvel. Micky Morgan gained the power to become Marvelman (who had Captain Marvel-like powers) by saying "Kimota" ("Atomik" backwards) from an astrophysicist. He has two sidekicks: Dicky Dauntless aka Young Marvel and Jonny Bates aka Kid Marvelman (rip offs of Captain Marvel Jr. and Mary Marvel). They had bland adventures until they were canceled in February 1963.


Marvelman became a strip for Warrior. Alan Moore wrote Marvelman, which was the first superhero he wrote, with darker themes. An adult Micheal Morgan was a reporter who couldn't remember his adventures as Marvelman until he accidentally saw the word "atomic" backwards and spoke it aloud. Uttering the word (which is pronounced like "Kimota") turned him into Marvelman. He regained his memories but no one remembered Marvelman except as a comic books character. He battled against a power-mad Kid Marvel, resulting his in Kid's innocent alter ego going insane with guilt. Marvelman managed to muscle his way into a secret bunker, where he discovered the truth: he was part of "Project Zarathustra", where the government tested alien tech on human resulting in them gaining superpowers. Said humans were unconscious and had their mind fed comic book adventures as memories. On their "last " mission, the government tried to blow them with a nuclear weapon because the project was terminated. Marvelman turned to normal and lost his memories, but Young Marvelman was killed. Marvelman discovered his wife was going have a child who could become the first naturally born superhuman. Warrior stopped at issue 21. Due to pressure from Marvel Comics, the hero's name was changed to "Miracleman". He got his own series that lasted for 16 issues. Two alien races called the Warpsmiths and the Qys come to Earth. We discovered there are other native superhumans on Earth. The aliens, Miracleman, the brand new Miraclewoman and their allies have a gory battle with a now insane Kid Miracleman (Kid Marvelman). The battle kills 40,000 people and ends with Miracleman killing KM in his non-power form to prevent him from going on another ramage. In the last issue, the superhumans took over the world and were worshiped as gods. This series is characterized by extreme violent and gore that was to such a degree that was never seen before.


Neil Gaiman took over the series at issue 17. He plotted the series to have three books: "The Golden Age", "The Silver Age" and "The Dark Age". In "Golden Age", Miracleman and superhumans make the world a utopia via alien tech. Although, Miracleman questioned they are doing the right thing. This volume focuses the people affected by these event a la The Sandman. Neil Gaiman finished the first two issues of "The Silver Age", but didn't actually finish it. In the issues he did finish, Kid Miracleman was brought back...again.


Marvel Comic has gained the rights to the character. They plan to reprint various stories. They are trying to sort out some the copyright debates.


My main source was Wikipedia.
Posted by Skippy at 5:36 AM No comments: 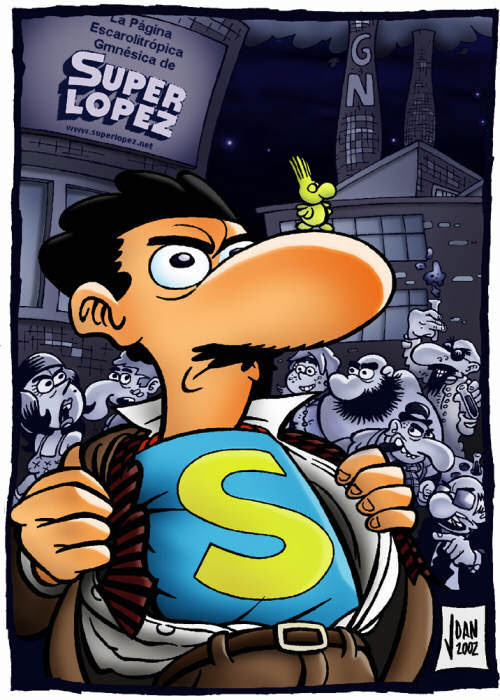 Superlopez is Spanish comic parody of Superman.
He was born Jo-Con-El (which means D*mn-The-Brat) on the planet of Chiton (which means Shut It). He accidentally activated a spaceship sending him to Earth, where he landed was adopted by Barcelonan parents. He took the secret identity of Jaun Lopez and got a job with a bad-temper Lois Lane parody Luisa Lanas, his not-so-pal Jaime Gonzalez Lidenbrcok (parody of Jimmy Olsen); and his demanding boss, who is an unnamed parody of Perry White.
Like any hero, Superlopez has enemies. These include Escariano Avieso (a evil professor), Lady Arana (which means Lady Spider), a parody of Al Capone called Al Trapone and Refuller D'Abastos (a mob boss).
Superlopez has allies too. His main allies are the member of El Supergrupo (which means The Supergroup). The members include a Doctor Strange parody El Mago (which means Wizard); a Captain America parody Capitan Hispania (which means Captain Spain); an Iron Man spoof Latas (which means Tin-Guy); a parody of the Fantastic Four's The Thing called Bruto (which means The Brute) and La Chica Increible (Incredible Girl), who is a generic parody of token female superheroes.


My main source was Wikipedia.
Posted by Skippy at 5:30 PM No comments:

Lethargic Lad is comic created by Greg Hyland. It started out as a normal comic. However, there is now a webcomic version of it (see http://www.lethargiclad.com/).
Lethargic Lad is the main character. He suppose to be the protector of Infantino City. He has the "power" of lethargy, which causes him to inactive and slow. He rarely talks, but instead utters "Umm..." His alter ego is Larry Ladhands, a parody of Bruce Wayne. He is rich and lives in mansion, under which is the Lad Cave (a parody of the Bat Cave), where he keeps his various tech.
The only other major character is Sailor Steve. Sailor Steve is a male otaku (a person with obsessive interests) friend of LL. He often dresses like Sailor Moon characters. He knowns a lot about Japanese pop culture (even more than some Japanese people).
My main source was Wikipedia.
Posted by Skippy at 5:15 PM No comments: 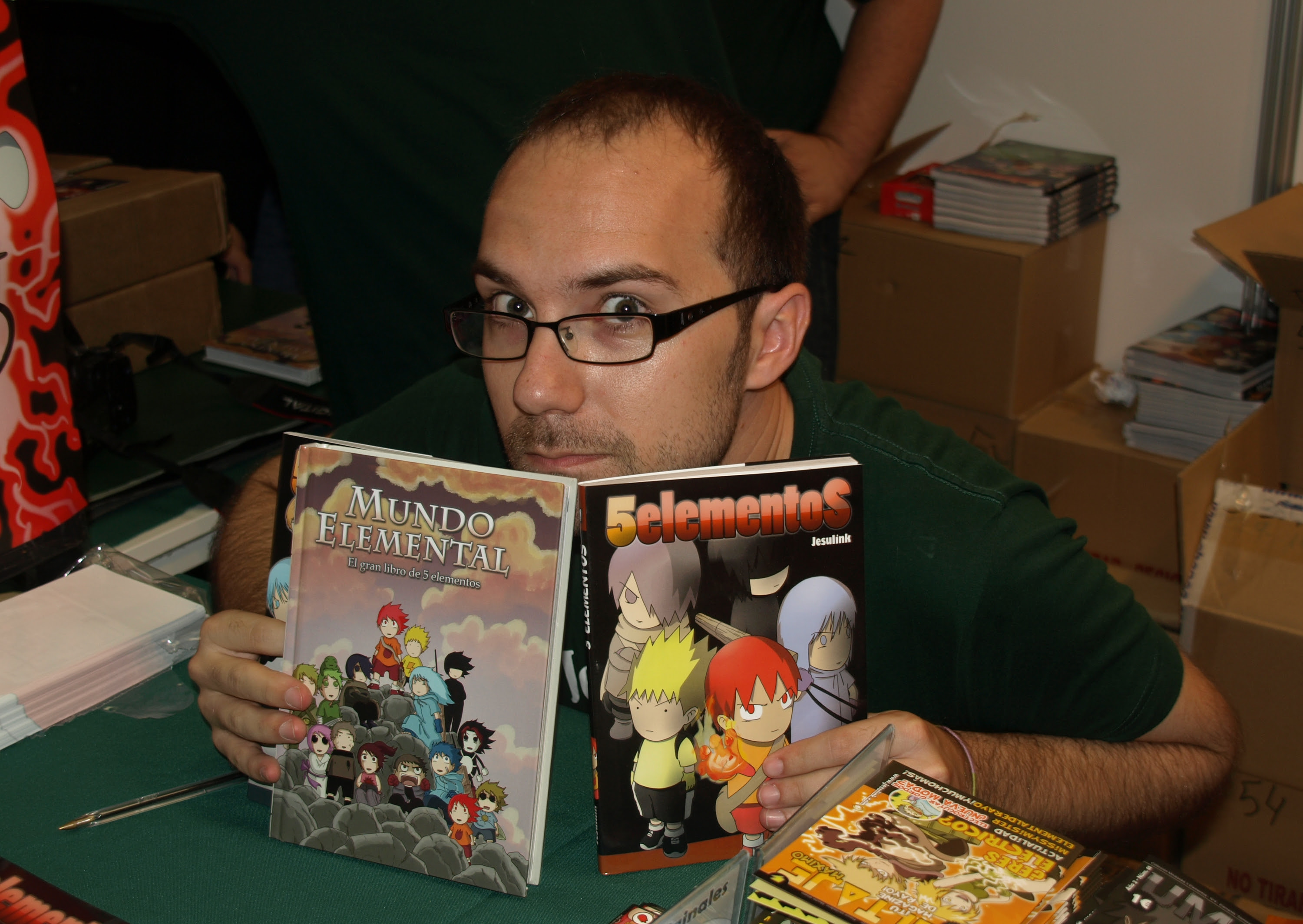 Series creator Jesús García Ferrer
Raruto is a Spainish webcomic that is a parody of the popular Naruto manga and anime series. It's made used by Jesús García Ferrer also known as Jesulink. He began it as a hobby, but started to feel like it was "responsibility" and tries to satisfy his readers.
The series has three main characters: Raratuo, Kuchilla Saske and Flora Margarina. Raratuo Zumomaki is the titular character. He is a parody of Naruto. He is the villiage idiot that has "a demon fox" trapped inside his body. Kuchilla Saske is a parody of Sasuke Uchiha. He hates "everything, white rice above all". Flora Margarina is a parody of Sakura Haruno. She is pointless for most of the series. She has spilt personaility and usually solve her problems violently. 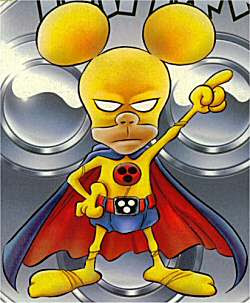 Rat-Man is an Italian comic about an inept superhero of the same name. The comic started out as a parody of Batman, but evolved into having complex continuity. It's also known for breaking the fourth wall, engaging storytelling and Monty Python-style nonsense humor.


Rat-Man's alter ego is Deboroh La Roccia. He lost his parents at the mall and was adopted by Janus Valker. He was originally Rat-Boy (a-la Superboy). He became a superhero to fulfill his fantasy of heroics. He joined the second Secret Squad (the first one was destroyed by a mole) formed by the scientific research centre that Janus works at: Elsewhere. In reality, an evil entity called Shadow tried to manipulate the team to take over 'No Name Country'. However, the Men in Tights, a team that embrace the dogma of the first Double S, clashed with the new team. No Country lost its faith in superheroes. After he quit and the Shadow attacked Janus, Rat-Boy fled to No Name City. He became MarvelMouse. He was forced to compete in gladiator battles. The American-style heroes were dying out and being replace by Manga-style characters. After defeating the "ultimate manga" Dragon, he decided to become a real superhero again. Now as Rat-Man, he became the protector of No Name City and one of the few superheroes left (aside the Double S controlled the Shadow). The Shadow (now controlling the body of Janus Valker) tried to destroy the the second Secret Squad to make a third one. This causes the team is disband thus making Rat-Man the last superhero. Rat-Man in 2003 entered a coma and woke up in 2005, where he has been replaced by a multitude of heroes. He retired and tried to make an animated series whose failure caused him to become a bum. The Shadow tried to make Deboroh his vessel only to be foiled by Rat-Man's friends. Janus manages to overcome the Shadow with the last bit of humanity he has left: the memory of being Deboroh's father. Rat-Man (struggling to become a hero again) goes to New York only find all the villains are gone and the heroes are addicted to their own power. Rat-Man convices them to retire and he returns to No Name City to become a hero again.


My main source was Wikipedia.
Posted by Skippy at 4:19 AM No comments: 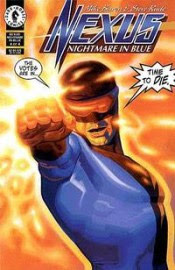 Nexus lives 500 years from now. He is really Horatio Hellpop, the son of a Communist General. He gained "Fusionkasting" (see below) from Merk (an alien entity). He has to kill a certain amount of mass murders as payment for his powers per "cycle". He will have maddening dreams and strong headaches until he he kills the murder.

Now, you are probably asking "What the @#$% is 'Fusionkasting'?". In the Nexus universe, Fusionkasting is the power to psychically draw energy from star's core. This will give the user super powers. However, this doesn't work across dimensions. Most of Fusionkasters use flight, force field generation and energy beam projection. Other common powers are super strength; degrees of telepathy; and telekinesis. Nexus and Plexus (I can't find out who he is, but he mentioned once) have display energy absorption, matter creation / transmutation and teleportion, but no other Fusionkaster has display these powers.
The series was inspired by Space Ghost. It has a clear and distinctive style a la Alex Toth's cartoons and "commercial illustrators of the 1940s and 1950s". The series' artist ironically later drew a Space Ghost comic. Mike Baron (the writer) also included social satire such as media channels being overwhelmed by ads and an analogue to the Internet.
My main source was Wikipedia page "Nexus (comic)".
Posted by Skippy at 6:01 AM No comments: