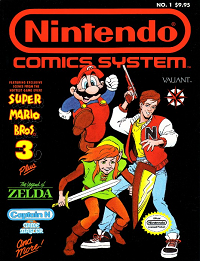 Valiant Comics (a year after its founding) created a series of comics books collectively called the Nintendo Comics System based on various Nintendo game and related shows. Here's a list of the featured comics:
Despite the comics' cancellacation, there have still been Nintendo comics just not published by Valiant.
My source was:

Posted by Skippy at 2:05 PM No comments: 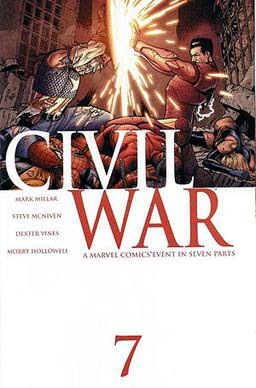 Due to all the damage superhero-villain fights cause, Marvel Comic universe US government passed the "Superhuman Registration Act", which would force all super humans to have to register. The act got real support from the public after Nitro killed 600 people with his explosive-based powers due to the New Warriors botching up. This caused a divide between the superhero community: the pro-SRA side led by Iron Man (I have no clue why) and the anti-SRA side led by Captain America.
While the Anti-SRA are arresting actual villains, the pro-SRA arrested anyone unregistered hero or villain alike. The X-Men and the Runaways (some of the few mutants left after M-Day) decided to be neutral, while some villains move to Canada. Captain America and his forces were ambushed by Iron Man's forces. Refusing to talk, Captain America attacked Iron Man leading to a fight. A clone of Thor was sent to capture the anti-SRA heroes, but ended up killing Goliath. While the pro-SRA restrained the clone, the anti-SRA heroes escaped. Iron Man and Mister Fantastic built an prision, Project 42, in the other dimension Negative Zone, to contain the anti-SRA people. Spider Man (originally aiding the pro-SRA side) turned on Iron Man when he discovered that he didn't plan on releasing the caputred oppopents of the SRA. The Punisher stole plans for Project 42.
The anti-SRA heroes reached the prision only to met by the pro-SRA heroes (including Iron Man) and nanites-controlled villains. Hulkling freed all the captives leading to a full-on pro-SRA side versus anti-SRA side fight. The "fixed" Thor clone and Captain Marvel join the pro-SRA side in the battle only for Namor and Atlanteans to join the anti-SRA side. Seeing the destruction caused by the fight, Captain America surrended. Two weeks laters, the Fifty State Initiative (a government superhero program) was lauched and the remaining anti-SRA heroes either went to Canada or became "underground" heroes. Captain America was sent to trial...only to be shot by Crossbones.
My source was the Wikipedia page "Civil War (comics)".
Posted by Skippy at 2:35 PM No comments: 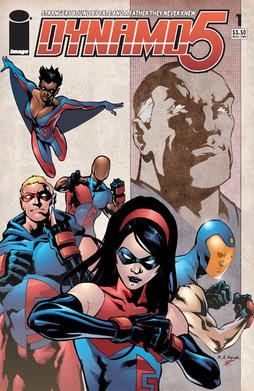 The Dynamo 5 was based on the concept of "a team that was a biological family but did not act like it".
Captain Dynamo is the protector of Tower City and husband of Maddie Warner. Maddie found him dead via poisoning by the Windowmaker. She also discovered that the Captain was cheating on him. Despite being naturally upset, she realized the city's villains would try to take advantage of his death so she decide to round up five of his illegitimate children. She exposes them to the radiation that gave the Captain his power thus unlocking their latent super powers (they each inherited one of his powers). These people include the geek Hector Chang (got super vision abilities), respectable activist Olivia Lewis (flight), cynical womanizer Spencer Bridges (shape shifting), a film school graduate Bridget Flynn (super strength) and "arrogant jock" Gage Reinhart (telepathy). Maddie acted as their mentor and tried to mold them into a family despite having almost nothing in common. They used the Captain's former base. A year later, after Hector's parents are nearly killed, all the member (save Olivia) gave up being superheroes. Olivia formed her own team, which the former members ended up having to save. They decided to reform the team. The team fought the villain Synergy (another illegitimate child of Captain Dynamo), which causes them to have their powers messed up and manifested new ones. In Dynamo 5: Sins of the Father, the three sons of Dominex, a villain that got beat up by Captain Dynamo, Omni-Man and Supreme, came to Earth to regain their family honor by beating up Earth heroes. Despite the aid of other superhero teams, the D5 failed to stop them. When the sons killed his girlfriend, Hector (now having super strenght) stole the Strong-Suit (which amplify one's strength) and killed them (even when one surrender much to everyone's horror).

My source was the Wikipedia page "Dynamo 5".
Posted by Skippy at 6:11 PM No comments: 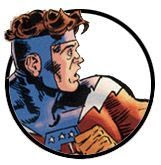 First American is a parody superhero that appears in the America's Best Comic series Tomorrow Stories.
The First American is middle-age man that is slightly overweight. Despite his claims, he has no powers and likely has below average human physical and mental abilities. He has incompetence that borders on mental illness. As such, his origin and back story is muddled. He claims to be "genetically engineered today for our nation's tomorrow"; not the First American, but Christopher's descendant.  He is supposedly a man born in the Great Depression and that got his powers from a convoluted series of events parodying the origins of Daredevil, the Hulks. Batman, Superman, Fantastic Four. Spider-Man and etc. He has an ex-stripper U.S. Angel who hates him and wants to be "The Next American".
My source was the Wikipedia page "First American (comics)" and the image was from Comicvine.
Posted by Skippy at 4:35 PM No comments: 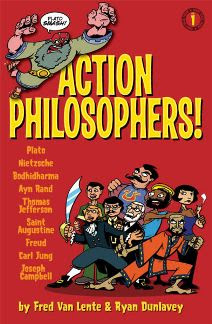 Action Philosopher! is a humorous non-fiction comic written by Fred Van Lente with Ryan Dunlavey on art duties. The series explains the philosophy and lives of various philosophers throughout history in a humorous and simple way that the average Joe can understand.
The comic often will have straight-forward, simple explanations of the philosophies with humorous cartoons often with pop culture references. It at times it homages famous cartoonists such as Jack Kirby, Bil Keane and Charles M. Schulz. The series has been praised by Philosophy Now and was nominated for an Ignatz Outstanding Debut Award. "Throw caution to the wind and go all-out on one of your rivals with a series of comic book-styled propaganda and recycle the same two games within them as "proof" of your machine's superiority while introducing a laughable spokesman who, the marketing department not caring, decides to model after a co-worker so as to mock him." - TvTropes describing the Johnny Turbo

Some of you might know about Captain N: The Game Master, a quasi-superhero cartoon that was basically an ad for Nintendo products. Johnny Turbo is the Captain N for Hudson Soft and NEC. Johnny was not only an ad for their system the TurboDuo (a TurboGrafx-16 and TurboGrafx CD hybrid capable of playing CD games), but also propaganda against Sega, a rival of Hudson Soft and NEC who released a similar product called the Sega CD. According to TvTropes, the comic also made fun of the real-life people John Brandstetter and (possibly) Tony Ancona. The comics' issues was published in issues of Electronic Gaming Monthly.

In issue 43 (the first issue), FEKA's (Sega parody) CEO, FEKA Czar / Mr. FEKA (he's called both), explained his evil plan to sell their CD console: claim it is the first and only CD console despite the TurboDuo being first. John Brandstetter learned of this and switched into his alter ego of Johnny Turbo (we don't get an origin story) and confronted agents of FEKA. After exposing their lies and attacked them, he discovered they're "not even human".

In issue 44 (issue 2), Mr. FEKA came up with plan B: tell kids CD console is a stand alone system even though it isn't. After bashing on Sol-Feace (having said it "doesn't even compare" to the similar TurboDuo game Gate of Thunder), John Turbo interrupted the sales of FEKA system and outright threatened Mr. FEKA.

In issue 45 (issue 3), Tony (Johnny's roommate) had a surrealistic dream in which Johnny told him about Gate of Thunders, Lords of Thunder and a code for the 3-in-1 disc that unlocks a Bomberman game.

Reception of the comic was poor. Jonathan J. Burtenshaw called the comic "overly confrontational" and "petty". Linkara (from Atop The Fourth Wall) mocked the comic on one of his live shows pointing out the plan in issue 44 isn't something Sega did and how the comic's argument boils down to "we did first" and nothing else.

My sources were the Atop the Fourth Wall episode "Revenge of the AT4W Live" and the Wikipedia page and TvTropes "Johnny Turbo".
Posted by Skippy at 7:39 AM No comments: 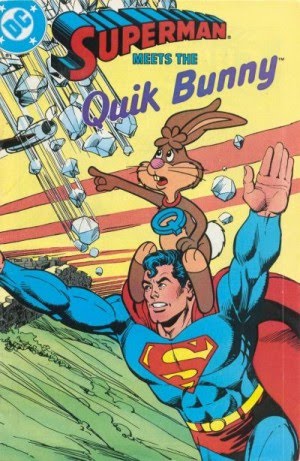 I said "Archie Meet the Punisher" was the dumbest crossover ever. I forget about this one.
The comic starts with Superman finding a flood coming out of nowhere. Meanwhile, the Quik Bunny and the Quik Qlub (kids obsessed with a single drink object) building a multi-story tree house, which the inside of which is metal. They turn a television and see what Superman is doing. The Quik Bunny convinces the Quik Qlub to aid Superman. The Quik Qlub turns into a rocket-helicopter hybrid and flies off to Superman (I'm not joking). It turns the flood was caused the villain, weather-controlling Weather Wizard. The Quik Qlub put info into computers and figure out the Weather Wizard was behind the flood. They use a microphone to tell this to Superman. Weather Wizard froze ice around Superman and ran away. The QQ use a mechanical hand in their club to grab the ice cube letting Superman unfreeze himself (despite the fact the impact would have little effect on the invulnerable superhero). The Quik Qlub figure out Weather Wizard went to Washington DC. Despite Superman telling them not to, the Quik Qlub follow him to DC and turn the club house into a hot air balloon. The Weather Wizard unleashed a tornado to cause chaos, which according to Superman will make him president. The Quik Qlub go into the the tornado's eye. The Quik Bunny distract the Weather Wizard thus ending the tornado. Weather Wizard (who says he'll go there), Superman and the Quik Qlub (now the tree house is a jet) go to Egypt. WW caused a snow storm near a pyramid. Superman is being vexed by a mummy, which the Quik Bunny easily defeat. The Superman rip the pyramid apart and find WW. The kids accidentally distract Superman thus allowing Weather Wizard to go to China and loudly saying so. Superman and Quik Qlub fly to China only to be attacked a hail storm. The club house turn into a boat and land in a river. Via a radio, the Quik Qlub discover Superman and WW is at the Great Wall. The Quik Bunny (via drinking Quik chocolate milk) gets an idea. The Weather Wizard attacks via lightning what he thought was the Quick Bunny, but it was a metal statue the deflect the bolt and knocked out the WW. Randomly inserted throughout the book are pointless and easy puzzles.
My main source was the Atop the Fourth Wall episode about the comic.
Posted by Skippy at 2:55 PM No comments: