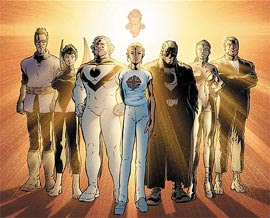 The first volume of the The Authority was done by Warren Ellis and Bryan Hitch. This series introduced "a team of superheroes who promised to get the job done by whatever means necessary" called the Authority. The team consisted Jenny Sparks ("the Spirit of the 20th century"), Jack Hawksmoor ("Gods of the Cities"), Swift (a Tibetan woman with bird-like wings and talons), Apollo (a genetically engineered Superman pastiche who is gay), the Midnighter (a Batman pastiche and lover of Apollo), the Engineer (who replaced her blood with nano-technology) and Doctor (a Dutch junkie with magic powers). The team also had a living space ship called "The Carrier" This lasted 12 issues with 3 story arches. It was noted for it use for decompression (see my post on the topic) storytelling. Mark Miller and Frank Quitely (the latter uses a pen name) took over. They added a "revolutionary attitude" (the team challenging the status quo even when it comes to nations). Jenny dies (due to the 20th century ending) and Jack become leader. The US government form a counter team called G7 when they get annoyed by the Authority. Jenny Quantum (the spirit of the 21st century) was adopted by Apollo and Midnighter (who are now married). The Doctor overcame his addiction, but felt guilty for missing one the team's greatest challenge due to his addiction.
The second volume was written by Robbie Morrison and the art was mainly done by (a special related to the series feature other artists) Dwyane Turner. This lasted 15 issues (issue 0-14). This version was noted for "gratuitously placed and stylistically jarring four-letter" cuss words. In a four way crossover with Stormwatch: Team Achilles, Sleeper and Wildcats v3.0, the Authority took over the United States of America.
Volume 3 was actually called The Authority: Revolution. This was written by Ed Brubaker and had Dustin Nguyen and Richard Friend on art. This focused on the problems the team faces as the rulers of USA.
Volume 4 was the shortest volume. Grant Morrison was suppose to write a bimonthy series with Gene Ha on art duties. This lasted two issues. In this, a guy called Ken search for a downed submarine and finds not only the submarine, but also the Carrier. Ken later met the team. Keith Giffen was suppose to take over only for that to be scrapped.
Christos Cage and Darick Robertson wrote a miniseries called The Authority: Prime, which was basically volume 4.5. It focused on Stormwatch Prime and Authority teaming up to investigate a secret bunker.
Volume 5 had Dan Abnett and Andy Lanning writing and Simon Coleby as artist. This tied with the World's End crossover. Marc Bernardin and Adam Freeman took over as writers and Al Barrionuevo became artist. Christine Trelane (former co-leader of Stormwatch), Death Blow, former Stormwatch member Flint, Freefall from Gen13, Grifter from WildC.A.T.S., powerless ex-villain the High and Rainamaker also from Gen13 joined. Tom Talyor took over as writer and Mike S. Miller was the artist for the last two issues.
My source was the Wikipedia page "The Authority".
Posted by Skippy at 5:48 PM No comments:

"Archie Meets the Punisher" or "The Punisher Meets Archie" 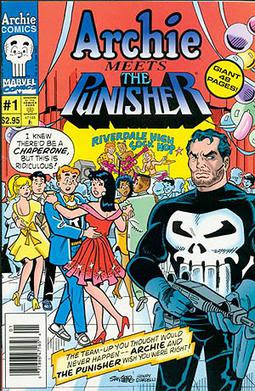 This is likely the dumbest intercompany comic book crossovers ever.
Comic is about the Punisher hunting down a drug dealer called Red (however a deal the Punisher made with the government means he cannot use his normal lethal methods). Red decided go to Riverdale (home of Archie). Unfortunately, Red looks like Archie (although the art makes Red look more muscular, but this wasn't commented on) and as such this leads to a comedy of error. After the Punisher and Archie figure out what is going on, they team up to capture Red. The comic ends with Professor Xavier telling Wolverine to hunt the world's most powerful mutant: Jughead.
My sources were the Wikipedia Page "Archie Meets the Punisher" and the actual Archie Meets the Punisher comic.
Posted by Skippy at 5:24 PM No comments: 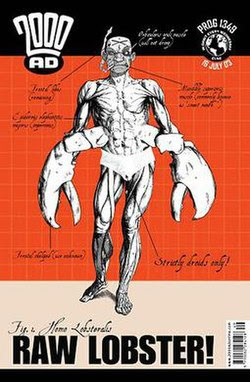 The British comic book 2000 AD has a tradition of giving their main characters distinctive visual appearance. This is one of the weirdest.
Lobster Random is a solider that genetically altered to not feel pain or need sleep. He also had two huge lobster-like claws coming out of his back. After being kicked out of the army, he decided to hire out his services because he is skilled in torturing people mainly in getting infomation.
He is a cynical, very grumpy and at times psychotic due to not sleeping for years and experiences after his discharge. He doesn't care about the methods he uses to get his job done.
My source was a Wikipedia page "Lobster Random".
Posted by Skippy at 6:01 PM No comments: 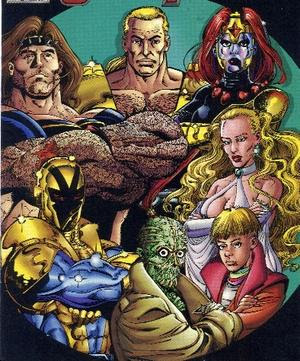 Ultraforce was a comic book published by Malibu Comics and then Marvel Comics, when they brought out Malibu.
Pre-Black September (i.e. before Marvel bought Malibu), the team was formed to protect the public by "ultras" (the Ultraverse' (Malibu Comics' fiction universe) term for super beings). The team consisted of the leader Contrary (who can "stimulate the pleasure/pain centers of the brain"), the undead Ghoul (who can re-attach limbs, speak to the dead and sense death), the super strong Hardcase (one of the first publicly known ultras), technician Pixx (who can project images), the Captain Marvel-rip off Prime (a 13-year old that turns into a hero with the generic Superman powers and energy blasts), Ultra-Tech company corporate spokesman-mascot Prototype (who has "biological energy generators" implanted in his body controlled by his power armor), warrior queen Topaz (who is super strong and tough and has power staff that turn her skin pale purple and shoot energy blasts) from another dimension called "Gwendor"; and minor members Siren (who is super strong and has liquid-based powers, unbreakable bones and super reflexes), Electrocute, Zip-Zap, Grenade, Spectral and Atom Bob (I can't find any info on the latter five).
Post-Black September (i.e. Marvel buying out Malibu Comics), the team was banded together again. Hardcase, Contrary, Prototype (replaced by Bob Campbell, who is his predecessor to the armor). The new team consisted of the leader Black Knight (who is a swordsman with magic senses and became the leader), the Bob Campbell Prototype , Amber Hunt (who has various mental, fire and light-related powers), Hellblade, Iron Clad, Lament, Maxis, Ripfire, Wreckage (I can't find any info on the latter 6 and no I'm being lazy the info on this team is near non-existence); and old time members Prime, Topaz and Ghoul. This is series lasted 15 issues until Marvel drove the line of Malibu Comics into ground.
My sources were the Wikipedia pages "Ultraforce", "Contrary (comics)" "Ghoul (Ultraverse)", "Hardcase", "Prime (comics)", "Prototype (comics)", "Topaz (Malibu Comics)", "Black Knight (Dane Whitman)", "Amber Hunt (comics)"; and Marvel Wiki pages "Ultraforce (Earth-93060)" and "Jennifer Pearson (Earth-93060)".
Posted by Skippy at 5:36 PM No comments: