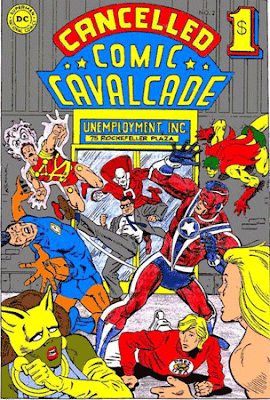 It wasn't a dumb crossover. It wasn't a stupid reboot. No, it was a massive cancellation of comic titles!

History
Explosion to Implosion
DC Comics did a marketing campaign between 1975 to 1978, during which 57 comic titles were premiered. This was known as "The DC Explosion". But, there was one unexpected foe who caused disastrous results: Old Man Winter! Due the Great Lakes Blizzard of 1977 and 1978, DC had extremely poor sales. For that and other economic reasons, DC has a massive cancellation of comic titles. Known as the "DC Implosion" (making fun of "The DC Explosion"), there were 65 cancellations. Also, the company had less than eight comics. Notable cancelled titles were All-Star Comics, Army at War, Aquaman, Mister Miracle, Shade the Changing Man, Black Lightning and Batman Family (which was "merged" with Detective Comics).
Cancelled Comic Cavalcade
Much of the unprinted work (that went unsold) actually did see print in Cancelled Comic Cavalcade, which had 2 issues. The content ranged from completed to uncompleted work. The original artwork was given to the rightful owners.
Reference:
http://en.wikipedia.org/wiki/DC_Implosion
http://www.dialbforblog.com/archives/252/
http://2.bp.blogspot.com/_pBSdfhtYXP4/SHzW5DnzinI/AAAAAAAAAwc/bkEUMFDBRn8/s400/Cancelled-comic-cavalcade-2.png
Posted by Skippy at 4:17 PM No comments:

Is Johnny DC a mutant or an alien? Neither, the answer he is a poorly-drawn metafictional character. In the Silver Age, Johnny DC was DC Comic's mascot that was used to promote comics. In the late 1980's, Johnny DC was the "host" of a comic promo page called "DCI with Johnny DC", which had miscellaneous DC Comic News, usually putting some comic books and creators in the spotlight and had a "partial checklist" of DC Comic titles. In the late 1990's, he appears as the main villain in the comedic, non-cannon Serigo Aragones Destroys DC, where he is delusional and thinks that the DC heroes have changed for the worst and tries to destroy the Justice League (by turning into a huge monstrous version of himself), only to be stopped by Batman. In 2004, Johnny was revamped as being a cartoon-like, mostly-silhouetted child that appears in DC Comics for 8-13 year olds. These were mostly comics based on Warner Brothers shows (Powerpuff Girls, Scooby Doo, Looney Tunes), oddly including comics based on shows based on DC Comics comics (The Batman Strikes!, Teen Titans Go!, Justice League Unlimited and Legion of Super Heroes in the 31st Century). Supposedly, Johnny edited the letters columns for these comics.
References:
http://www.dialbforblog.com/archives/1/johnnydc.jpg
http://en.wikipedia.org/wiki/Johnny_DC
http://en.wikipedia.org/wiki/Sergio_Aragon%C3%A9s_Destroys_DC
Posted by Skippy at 10:01 AM No comments:

Roy G. Bivolo wanted to become an artist... too bad he was colorblind. He would make paintings that he thought was beautiful, but everyone else thought it clashed. Roy's dad tried to cure his son's colorblindness, but due his health, he created somehow created a pair of goggles that created solid color (similar to the Green Lantern's solid light). He gave these to Roy on his deathbed. He decided to get revenge on the world that didn't like his art, by going on a crime spree and art from art galleries, saying if he couldn't enjoy them (due to his colorblindness), no one will. He clashed with the Flash and Booster Gold as well. He becomes a minor JLA foe. The villainess Blacksmith killed Roy. Rainbow Raider temporarily became a member of the zombie Black Lantern Corp. The super villain team, "the Rainbow Raiders", named themselves after Roy. It should be noted an unrelated super villain of the same name appeared in House of Mystery #167, who could change his costume color and get a different power depending on the color.
References:
http://en.wikipedia.org/wiki/Rainbow_Raider
http://www.jeremyrizza.com/images/raiderpride.jpg
Posted by Skippy at 1:27 PM No comments:

Even though it lasted 18 issues, it had some of the super, awesome comic heroes. Larry Herndon, Buddy Saunders and Howard Keltner all were comic book fans. At some time, the three saw the other's work and realized they were all in Texas. They met, in person, at Herndon's house. Since fanzine comics were common, the three became the "Texas Trio" and create their own fanzine: Star Studded Comics. Even though it was mostly the trio's work, other comic creators joined: Roy Thomas, Grass Green, Sam Grainger and Bill Dubay. Heroes included Doctor Weird (my favorite), Xal-Kor, the Defender, Powerman (no contention to the Marvel character), the Eye and Dragonfly to a name a few. Although the comic mainly focused on the Superhero gene, some stories focused on others: the Battle of Credibility Cap (Wild West), Warrior of Llarn (Sword and Sorcery) and Wildman and Rubberoy and The Count (satire). The comic ended when Larry Herndon, Buddy Saunders and Howard Keltner decided to "move on with their lives".
References:
The Best of Star Studded Comics
http://www.billschelly.com/media/05-SSC13.jpg
Posted by Skippy at 4:04 PM No comments:

This is my first post on a web comic!
Overview
Irregular Webcomic! features usually4-paneled strips (but the panel number can vary) that are photographically illustrated. These strips usually use Lego figures, but a few arches have featured other mini figures.
Themes (Story Arches)

There have been various miscellaneous strips and bizarre crossovers. For example, Steve getting fired from Hogwarts from his job as "Professor of Care of Magical Creatures".