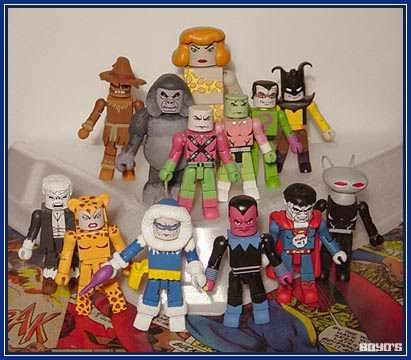 The Evil 3-Inch Plastic that is the Legion of Doom!

Despite the opening: "Banded together from remote galaxies, thirteen of the most sinister villains of all time - the Legion of Doom! ", 1o / 13 of them are natives of Earth. Only Sinestro (from Korugar), Brainiac (from Colu) and Bizarro (from Bizarro World) are aliens. They had a swamp dome-shaped base called the "Hall of Doom" able to travel in a bunch of ways. Please note: there is a wrestling team with the same name.
References:

Prior to Crisis on Infinite Earths, the Bizarro-Hal Jordan got a Lantern ring and Green Lantern battery from Bizarro, but Bizarro gave him a yellow lantern ring. So after 24 hours,  Bizarro-Hal became powerless (because the Bizarro-Yellow ring was powerless against green). Bizarro offered to craft a Yellow Lantern battery. But Bizarro-Hal refused because if (in Bizarro logic) the Green Lanterns are fearless, a Yellow Lantern has to be fearful and easily scared by anything. He also believed (based on Bizarro logic) being the most easily scare being in the universe makes the most courageous person on the Bizarro World due to their obsession with being backwards.
Afer Crisis on Infinite Earths, Bizarro III used his replicating powers to create Bizarro versions of Earth people and a world for them to live on. Among these imperfect duplicates was the Bizarro Green Lantern a.k.a. the Yellow Lantern. He was a member of the Bizarro Justice League and helped them stop Bizarro Doomsday. The Sinestro Corp ordered him away thus saving him from the destruction of the Bizarro World. Yellow Lantern was among the Sinestro Corp. agents that attacked Coast City.
Powers
The pre-Crisis on Infinite Earths version of the Yellow Lantern had different powers than a post-Crisis counterpart. He had a Yellow Lantern ring that works like a Green Lantern ring, but ineffective toward the color Green. Since his battery was green, he was powerless.
Post-Crisis, he also had a Sinestro Lantern ring. However, this one worked since he had a proper power battery. Unlike most Sinestro rings, he cannot affect things colored green.
References:
http://en.wikipedia.org/wiki/Yellow_Lantern (The content was removed)
http://greenlantern.wikia.com/wiki/Yellow_Lantern
http://en.wikipedia.org/wiki/Bizarro_League
http://www.comicvine.com/yellow-lantern/4005-47971/
http://images3.wikia.nocookie.net/__cb20090805210812/greenlantern/images/7/71/Yellow_Lantern.jpg
Posted by Skippy at 9:00 AM No comments:

Ambush Bug goes to court and his lawyer is the same guy suing him.
What is a seven-letter word for lunatic? Ambush Bug. On the planet Schwab, Brum-El got awards for being the "most well dressed" and became famous. One day, he got a letter (that he thought if he threw it away his life would be completely unchanged). So he did. He soon learn that it was really a intergalactic chain-letter! He should have been careful, because the last person to break the chain-letter was Jor-EL of Krypton! The now-disgraced Brum-El built an one-person rocket to save his clothes. But it was attacked by a radioactive, space spider, steering it toward Earth. In the attack and falling to Earth, only three pieces of clothes survived: 2 socks and a green, super suit with two orange antennae. Irwin Schwab (of Earth) was in his apartment and went to the roof to see what was wrong with the television antenna and discovered the now-damage rocket. He manage to get the suit and discovered the antenna were hollow and they created "bug-bots" that could teleport him. Meanwhile, Brum-El was actually looking forward to his planet's doom, only to have none thing happened. At first Irwin used this suit for evil and tried to destroy Superman as Ambush Bug, but only annoy him. So he became a hero and tried to befriend him, only to annoy him. This is because, due to his mental illness, Irwin can't understand what really is happening around him. He usually has bizarre adventure such as getting sent to Underworld and get forced to do stand-up comedy. His arch-enemy is a living sock called "Argh! Yle!" with a Dr. Doom-like mask.
References:
http://3.bp.blogspot.com/_8ie37mgxIXA/Sl-6IMlxvjI/AAAAAAAAFs0/kWIg7YQR030/s400/Ambush_Bug_Year_None_6.jpg
http://en.wikipedia.org/wiki/Ambush_Bug
Showcase Presents Ambush Bug Vol. 1
Posted by Skippy at 1:25 PM No comments:

Kid Eternity (left) and Mr. Keeper (right)
Quality Comics
Eternity was a nameless kid (who only remember his "Gran'pa" calling him that) that was killed by a U-Boat that sunk his granddad's fishing boat. However, he discovered to a mix-up he died seventy-five too soon. To fix the error, he was turned into a supernatural superhero for the next seventy-five years. He could good historical / mythological figures or become intangible / tangible via saying "Eternity". He was also aided by the idiot that made the error, Mr. Keeper. Notable villains included Her Highness and Silk (two con women) and Master Man (who had similar powers to KE, but summoned evil guys).
DC Comics
The owner of Quality sold his company to DC Comic. Kid Eternity lived in the same universe as Captain Marvel (which is different from the main reality), Earth-S. The reason this happen was the writer thought his powers were very similar to the Marvels (activating superpowers via a magic word). He was, now, Christopher "Kit" Freeman, brother of Freddy Freeman (Captain Marvel Jr.). He became a supporting character for the Big Red Cheese. Later in 1990s, Vertigo Comics (imprint of DC) unveiled a dark version of Eternity. His grandpa was actually a sexual predator (using Kid for his own purposes). He was a fishing boat, when a U-Boat blew it up. He went to a pseudo-heaven created by the Lords of Chaos. They manipulated him into being their pawn and think that he died seventy-five too soon and their sending him back was to fix the error. They gave him a minor Lord (Mr. Keeper) as a guide. They did this to speed up the evolution of mankind, so God will let them back into Heaven. The people he summons are actually demons in disguise. He was killed in JSA # 1, only to come back in Teen Titans # 31 via the new Brother Blood. He rebelled againist the Lords of Choas and nearly lost his powers only to be saved by the Lords of Order. But, he was weakened. His powers were similar to his pre-Veritgo except he could only summon thr figures for little over a minute. He might have beaten to death by the Calculator (mad that KE couldn't get his dead son back).
References:
http://en.wikipedia.org/wiki/Kid_Eternity
http://www.flashbackuniverse.com/blogImages/PDCCovers/KidEternity06.jpg
Posted by Skippy at 3:34 PM No comments:

http://www.internationalhero.co.uk/r/robohood.htm
Posted by Skippy at 7:38 AM No comments:

History
7 is a lucky number. No one knows that better than Jonathan L. Thunder! Born the 7th son on the 7th hour of the 7th day of the 7th month, Johnny was born with the power to control a genie-like thunderbolt. This causes foreign spies to kidnap him, until their political enemies stop them, unaware of Johnny's power. Johnny returns to the US and has a borin

g life, until he accidentally summon the genie with magic word "Cei-U" (pronounced "say you") and become a boxer. He called the genie "Thunderbolt". Then he joined the Justice Society of America! He was even "promoted" from mascot to a full-time member!
Personality
Johnny's main personality trait is he's dim-witted. This causes him to be comical. However his genie, Yz, is smarter and sarcastic towards his new boss.
Powers and Abilities
References:
http://dc.wikia.com/wiki/Johnny_Thunder_(John_L._Thunder)
http://images2.wikia.nocookie.net/marvel_dc/images/d/d0/Johnny_Thunder.JPG
DC encyclopedia
Posted by Skippy at 12:18 PM No comments:

"Hello, sir! Why are taking off your mask? AAH!!!!!"
-Victim 162 of Johnny
Johnny was a silent movie actor, until the "talkies" sent him into retirement. So he turned to a life of crime. He stole the "Subspace Prototype", which made him intangible. But Sandy the Golden Boy destroyed it, causing Johnny to go to another dimension. There his face was scarred and the "King of Tears" let him return. But now he was invisible until he took off his mask. He soon learned he was so scarred he killed anyone who look at him (with a few a exceptions)! He also learned the souls of those he killed went to the "King of Tears". He became an enemy of Sandy. Later joined the Injustice Society. Now he is the "King of Tears" enforcer.
Reference:
http://www.mocpages.com/user_images/16173/1229808127m_THUMB.jpg
http://www.mocpages.com/folder.php/37729
http://www.mocpages.com/moc.php/86089
http://en.wikipedia.org/wiki/Johnny_Sorrow
Posted by Skippy at 8:29 AM No comments:

The Secret Society of Super-Villain I

Issue 3 of their series
Beware of the SSSV! Formed by Darkseid (enemy of the New Gods), he did this to replace the ineffective Intergang. He got these mind-like villains: Captain Comet, a Paul Kirk-clone, Captain Boomerang, Captain Cold, Copperhead, Gorilla Grodd, Mirror Master, Shadow Thief and Star Sapphire. After learning why Darksied formed the team, they rebelled against him and functioned on their own. They plagued many super heroes and super hero teams. The Society still has struggles within the group for leadership.
References:
http://members.shaw.ca/vcofell4/myweb7/secret_society_of_super_villains_3.jpg
http://dc.wikia.com/wiki/Secret_Society_of_Super-Villains_I
Posted by Skippy at 7:30 AM No comments: 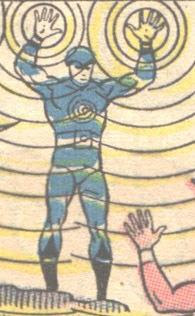 I want to shine some more ligth on Echo. Myke-4 Astor teams up with the Adult Legion of Super-Villains (for unknown reasons) calling himself "Echo". While the LSV try to lead their heroic counterparts to their deaths, Echo ambushed Cosmic Boy. Using his sound manipulation (manifested as vibration waves and sonic scream), he nearly defeated Cosmic Man (that time line's older Cosmic Boy)! But Cosmic Man use his magnetic control to take away the air from Echo (since it's oxygen and nitrogen are slightly paramagnetic) to knock him out and render him powerless (since sound travels through air).

I am writing about Number None, because I was running out of room in the "Brotherhood of Dada" blog and didn't put any detail.


Number None is the most elusive super villain ever and is apparently invisible. As Mr. Nobody said, Number None is every nuisance that happens to you that you didn't expect. Number None seems to be able to transform itself into anything that can get in your way and is invisible until he does so.


He joined Mr. Nobody's second Brotherhood of Dada. He manifest himself 3 times: 1) The door that hit Agent !, while closing itself. 2) The banana peel that Crazy Jane slipped on. 3) The step that was crush under John Dandy's feet.


Its unknown if John Dandy killed Number None, because it unknown if it can be killed. 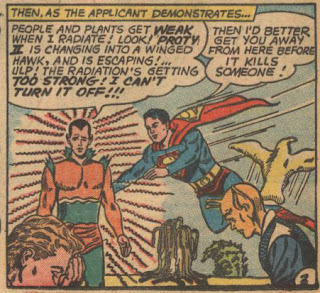 How Radiation Roy's try out for the Legion went
He has been a wannabe-hero, a villain, a hero and blood-thirsty alien hunter! Roy Travich developed the power to emit radiation, so be could join his heroes: the Legion of Super-Heroes. But he has little control over this power and was rejected. It didn't help that after Saturn Girl read his inner desires, she couldn't sleep for 2 nights. Angry and bitter, he joined the Legion of Super-Villains. He had relationship with Spider Girl, but this ended. The radiation took it toll on Roy, so he got a red containment suit to protect him. He later formed the "Justice" League Earth with other Earth-born Legion rejects Storm Boy (can control weather via a remote), Golden Boy (has the power of Midas), Earth Man (first known as Absorbency Boy) (can absorb super powers), Tusker (can grow unbreakable tusks) and Eye-ful Ethel (has eyes all round his head). They acted like priests and said Superman's Krypton origins were lies and the Legion were going to invade the Earth. They were worshiped as heroes by kids. They were actually mercilessly hunted every alien they could find (including the Legion of Super-Heroes). The Legion of Super-Heroes, Superman and the Legion of Substitute-Heroes exposed them and the league was sent to jail on the planet Tarkon-Galtos. But they were freed by Superboy Prime and they joined his Legion of Super-Villains (which had almost every foe the Legion of Super-Hero faced). While attacking the United Planet (yes, like the United Nations, but with planets), Radiation Roy killed Myg (the second Karate Kid), before Lighting Lad electrocuted him.
References:
http://www.mykey3000.com/cosmicteams/legion/docs/legion-rejects.htm#jla
http://www.comicvine.com/radiation-roy/29-31023/
Showcase Present: the Legion of Super-Heroes
http://1.bp.blogspot.com/_X2Flh5CSe80/RiV8kLztJOI/AAAAAAAAAJY/gj85_uy-NXY/s320/Radiation%2BRoy%2B3.jpg
Posted by Skippy at 5:46 AM No comments: