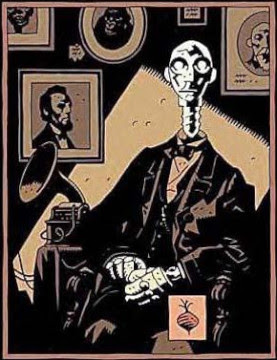 Plot
Screw-On Head worked for President Lincoln, who wants him to stop Emperor Zombie (undead occultist) and his goons (Dr. Snap & the vampire, Madam). The terror trio stole a manuscript that allows the owner to acess the temple of Gung. Gung was a warlord, who gained supernatural powers from a "melon-sized jewel". Screw-On (with of his manservant Mr. Groin and his dog, Mr. Dog) hunted down Zombie, but Zombie found the treasure of the temple: it wasn't a jewel, but "a small parallel universe" inside a turnip. So, Zombie freed the demigod inside, only to have SH defeated it in combat.
Characters

References:
The Wikipedia Page
Posted by Skippy at 10:15 PM No comments:

A superhero is a stock character that battles crime and injustice. However, despite the name, by most people's definitions, to be a superhero you don't need actual powers. Sometimes these heroes are referred to as costumed crime fighters. A female hero is often called superheroine.
Common Traits
Although most heroes like to be solo, sometimes heroes will form a team. Also, sidekicks have decreased in popularity.
Common Costume Features

Trademark Status
Despite the fact the term “super hero” is used generically, DC Comics and Marvel Comics jointly join the copy right to the term. However, some people argue that it does not met the legal status to be copy righted, and as such, it is a “misuse of trademark law to chill competition”.
References:
http://en.wikipedia.org/wiki/Superhero
http://upload.wikimedia.org/wikipedia/commons/0/0b/Fleishersuperman.jpg

Posted by Skippy at 5:04 AM No comments:

Fictional Character Biography
An elderly psychologist couldn't pay the plumber Griffin Gogol. So, he offered to cure Griffin of his smoking problem. We discover the psychologist is actually an alien. His treatment activated Griffin's previously unknown powers. He became Captain Ultra and donned colorful and clashing costume. However, the treatment gave him pyrophobia. At first, he tried to be a villain and join Frightful Four. At first, they accepted (due to his wide range of powers). However, when one of them lit a cigarette, Ultra fainted and was rejected. He decided to become a hero. Moving to Chicago, he began a minor solo superhero career and battled minor villains. Doc Samson helped the Cap to get over his fear and he became a stand-up comedian and fought with Ekl'r, the Demon Without Humor. He went on an across-country comedy career, but his superhero career made this difficult. Griffin joined the Nebraska team part of the Initiative program (a government superhero program). He once battle Iron Man to protect his team.
Powers and Abilities
The Captain's main powers are super strength, endurance, durability, reflexes and flight. Apparently, his "ultra-potential" allows him to get a wide variety of powers. As such, he has also displayed intangibility (he can pass through objects), super breathe, X-Ray vision and once told an "ultra-joke" (the reader is left to fathom the meaning of that).
References:
http://en.wikipedia.org/wiki/Captain_Ultra
http://www.marveldirectory.com/pictures/individuals/c_1d/captainultra.gif
Posted by Skippy at 4:59 AM No comments: 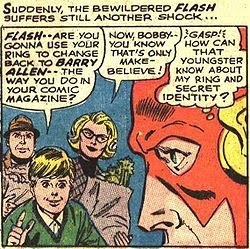 History
In the originally, Earth Prime was the real universe that you and I come from. In Flash #179, while hunting a monster called the Nok, he got stuck in Earth Prime. He met his editor, Julius Schwartz, and the duo somehow created a new cosmic treadmill to get Flash home. It was stated that the writers of Earth Prime based their comics on actual people and events (just in alternate universes). In Flash # 228, Earth Prime's Cary Bates discovered he could effect the events in Earth One and went on a rampage there, only to be stopped by Elliot S. Maggin. Earth Prime began to differ from our reality and it had two heroes: Ultraa and Superboy-Prime. Earth Prime was destroyed in Crisis of Infinite Earths # 10. In Infinite Crisis # 6, Superboy-Prime conviced Alexander Luthor to draw inspiration for his new "Earth" from Earth Prime (he calls it an "ideal world"). He went looking for it and (in a nod to the original Earth Prime) looked at readers and reached out for our reality. In 52, Earth Prime was restored.
References:
http://en.wikipedia.org/wiki/Earth_Prime
http://upload.wikimedia.org/wikipedia/en/a/a7/EarthPrimeFlash179.jpg
Posted by Skippy at 4:55 AM No comments: 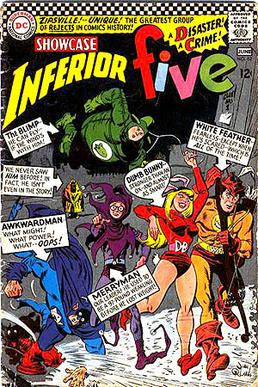 History
In Megalopolis, a mad scientist was on the loose. Myron Victor (the son of Patriot and Lady Liberty, members of the Freedom Brigade) told his parents they were too old to be heroes again. They agreed... but forced him to become a hero! Any way, he gathered the sons and daughter of various members of FB and (due to their incompetence) dubbed themselves the Inferior Five. The team first appeared in Showcase #62, 63, and 65 and then got their own series, which lasted 12 issues (however the final two issues were titled the Inferior 5 not the Inferior Five). The team met various parodies of Marvel heroes (such as a jab at Fantastic Four called the "Kookie Four").
--Current Status --
The team has made several cameos in the modern continuity. Dumb Bunny is a supporting character in the 1st Angel and the Ape miniseries. Merryman and Dumb Bunny appear in a crowd in Superboy. In Bulleter, Dumb Bunny appears at a superhero convention. In 52 week 18, the Blimp was at Booster Gold's funeral. In Final Crisis: Superman Beyond, Merryman is the king of Limbo. Dumb Bunny played a important part in Ambush Bug: Year None issue 3. In The Brave and The Bold #35, the Legion of Substitute Heroes team up with them. Here, the 5 were from 1972, but got stuck in 2010.
Members
References:
http://en.wikipedia.org/wiki/Inferior_Five
http://www.cosmicteams.com/cosmic/inferiorFive.html
http://upload.wikimedia.org/wikipedia/en/d/d5/Showcase_62.jpg
Posted by Skippy at 5:21 PM No comments:

History
He has also has been called the Cockroach... and Moon Roach... and Captain Cockroach... and Wolveroach, Purel Platonic Priest Roach, the Sacred Secret War Roach, the Super Secret Wars Wolveroach, normalroach, Sgt. Preston Roach, Punisheroach,Venomroach -- should I go on? This is mainly due to his multiple personality disorder. We first meet the Roach using the alias of the Cockroach (a parody of Robin Hood and of Batman), who tried to hunt down the criminals that killed his parents (due to his mental instability it's unknown if his parents were actually killed), but usually he beat up some poor sap and took his money and hid it in his chimney. He also had the alter ego of a merchant who doesn't like magical items, because he thought they were bad for businesses. Cerebus stole his already-stolen money. Months later, the Roach reappeared as the patriotic Captain Cockroach (a parody of Captain America) and got an albino sidekick called "Bunky" (a parody of Bucky), who was also nuts. His 86ed this and became Moon Roach (Moon Knight), who used darts shaped like crescents. This identity lasted a long time. During this time, he sometimes slipped into the Roach-Hulk persona and gained a weakness to frostinite: normal ice and snow. Since then, he has also become normalroach (normalman?); Punisheroach (Punisher), who hunted a drug dealer with cross- bows; Wolveroach (Wolverine) and Swoon (Neil Giaman's Sandman). He haunts the Earth Pig (Cerebus) when he least expects it.
Powers
He has super strength and is resistant to damage. Over time, he has gained some telepathic powers.
References:
http://internationalhero.co.uk/r/roach.htm
http://www.beguiling.com/images/cerebus84.jpg
Posted by Skippy at 5:03 AM No comments: