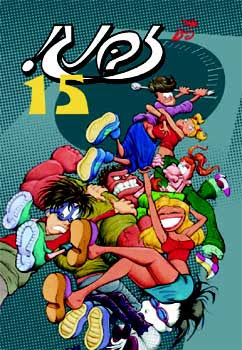 Zbeng! is Israeli humor comic series targeted towards teens, written by Uri Fink. The series focuses the everyday life of adolescent students of an fiction high school in Gush Dan. It spoofs Israeli culture, adolescent experiences, society and the overall human condition. The comic's characters are basically all exaggerated stereotypes. The main characters (there are too many to list save the main four) are:

Zbeng! is a strip for a teen magazine called Ma'ariv La'noar. It immediately became popular upon first appearing in August 17, 1987. It started as a single page strip, but soon expanded to being multi-paged. Part of the comic's success is due to the author's willingness to change characters to reflect the times. Despite its popularity, Israeli parents and educators criticized it for it's stereotypical characters, "portrayal of sexual activity" and contempt for authority (especially adults).

My source was the Wikipedia page ""Zbeng!".
Posted by Skippy at 4:42 PM No comments: 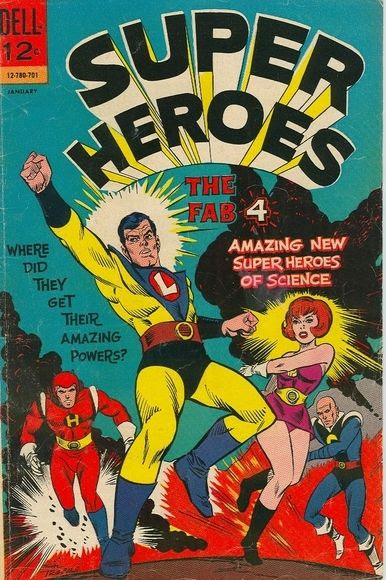 Four kids, Reb, Tom, Polly and Dan, went to the Dell Hall of Heroes which wax statues of heroes despite Dell only having a handful other superheroes and not enough for a museum. They wandered into the "Future Room", which for some reason had experimental robot superheroes. Doctor Luuki (the discredited maker of the robots) caused an electrical explosion causing the Enndo-Man robot to come alive and go berserk. The explosion also caused gave the kids the ability transfer their minds into the remaining robots. They stopped Enndo-Man and Luuki and become the super hero team Fab Four. They also fought the Coal Man, Johnny Boom Boom, Mr. Nutt and the Clown. The Fab Four's comic Super Hero lasted four issues.

The teams members were Crispy (really Reb), who could freeze things; Hy (Tom), who could generate sound waves; the super fast, resistance to heat Polymer Polly (Polly), who was also super fast and generate super strong polyfilament fibers (hence her name); and El (Dan), who has x-ray, infra red and heat ray vision.


My sources were the International Catalogue of Super Heroes pages "Fab Four" and "Dell / Gold Key Comics".
Posted by Skippy at 12:45 PM No comments:

The New Guardians were a superhero spurned off out of the crossover Millennium. The Guardians of the Universe (who are basically the CEOs of the Green Lanterns) found several humans, with "superior genes" that are suppose to help humanity survive for the next millennium by passing their genes on, and gave them super powers. They got their own series. It became infamous for SnowFlame, a cocaine-powered super villain.

Their members were racial (and, in Extrano's case sexual) stereotypes. The team consists of Betty Clawman (a disembodied head with ill-defined powers); the Spanish stereotypical gay man Extrano (who has magic powers); the plant man Floronic Man (who should be a villain, but isn't in this series), the Chinese Gloss (who has earth-based power that somehow involve dragons); flying, self-replicating, energy-using Harbinger (who accidentally killed her boss the Monitor); the English, electromagnetic field-controlling Jet; the Japanese cyborg Ram; and Green Lantern's pal Thomas Kalmaku (who gained the power to "bring out the best in people").
In the "New 52", a New Guardians team appears. The team are representatives of the various Lantern Corps. Members are Kyle Rayner (Green), Fatality (Star Sapphire), Arkillio (Sinestro), Saint Walker (Blue), Bleez (Red), Munk (Indigo) and Glomulus (Orange).
My references were Atop the Fourth Wall episode "New Guardians # 2" and the Wikipedia page "New Guardians".
Posted by Skippy at 3:47 PM No comments:

Marville was a parody comic created for the U-Decide contest. U-Decide was a contest to see if Peter David's Captain Marvel series, Bill Jemas's Marville or Ron Zimmerman's Ultimate Adventures would sell better.
The actual comic itself is suppose to be about (it loses focuses as it goes on) Kal-AOL. Kal-AOL is the son of Ted Turner from the year 5002. When Ted thought the Earth (now called AOLon, due to being bought by AOL) was going to be destroyed by meteors, he used his time machine (made out of old video game systems) to send Kal-AOL to the past, where he tries to be a superhero despite his lack of superpowers.
Marville was poorly received. Lewis Lovhaug called it one of the worst comics ever made. Similarly, Comic Alliance listed it as one of "The 15 Worst Comics of the Decade". The some sources of criticism were the "lame" jokes and out-of-date references to Ted Turner.
My sources were a Google search of "reception of marville comic", the Wikipedia page "Marville (Comics)" and the Atop The Fourth Wall episode "Marville # 1"
Posted by Skippy at 3:03 PM No comments: