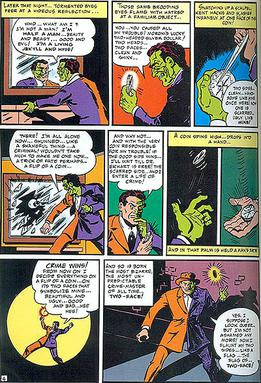 Harvey Kent a.k.a Harvey Dent was a friend of Batman. But one day he accused Sal Maroni, a crime lord, for murder. It was proved that he did it when Maroni's "lucky" two headed coin was found on the crime scene with Maroni's fingerprint on it. In rage Maroni threw Sulfuric acid at the left half of Harvey's face, scaring it. His horrible look caused him to go insane and scar one face on his coin. He flipped it to chose between a life of crime or good doing. Sadly, a life of crime won.
So he decided to decide everything on the flip of a coin. Thus one of the strangest and unpredicable ciminals, now calling himslef Two-Face was born.
References:
http://en.wikipedia.org/wiki/Two-Face
http://upload.wikimedia.org/wikipedia/en/5/58/Twoface-tec66.jpg
Posted by Skippy at 5:09 AM No comments:

You all know the Joker and the Penguin. But some of Batman's foes, like Zebra Man, one has ever heard of! So I plan on telling you about Batman's top 5 infamous foes.
5. Ten eyed Man
Philip Reardon was a warehouse guard. But one night a group of thieves knocked him out and planted a bomb. Batman came to stop them. Phillip (now awake) mistaked Batman for one of them and battled him. The bomb when off and blinded Philip. Dr. Engstrom (a eye doctor) reconnected his optic nerves to the end of his fingers (allowing him to see through them and giving him 360° vision). He blamed Batman for what happened and decided to get his revenge on him as the Ten Eyed Man.
4.Zebra Man I
Jake Baker was a high-tech scientist, who machinery gave him Black and white strips (made more visible by a glowing aura) and the power to magnetize anything. He went on a crime spree,before Batman and Robin defeated him.
3. Crazy Quilt
He was a painter for no appertain reason was a thief. When he was double crossed by his own lackeys, he was blinded by a gunshot wound during his arrest. In a volunteered procedure, a helmet was fused to his head, this caused him to see again,but he saw color blindingly vivid and disorienting. Now his helmet act as his eyes and can hypnotize people and project lethal lasers and blinding lights. During his life of crime he has run into Batman.
2.Spellbinder (Berbert Billings)
He was a pop art forger, that decided to be a criminal. So he built illusion-creating and hypnotic weapons and hired henchmen. Despite his luck in his first 2 robberies, he got busted by Batman.
1. The Terrible Trio
Three bored rich inventors wanted not to be bored, so they became Fox, Shark and Vulture (named after the cartoon animal mask they wore with their suits): the Terrible Trio. Their most recurring foe is Batman and Robin.
References:
http://en.wikipedia.org/wiki/List_of_Batman_Family_enemies
http://en.wikipedia.org/wiki/Ten_Eyed_Man
http://en.wikipedia.org/wiki/Zebra-Man
http://en.wikipedia.org/wiki/Crazy_Quilt
http://en.wikipedia.org/wiki/Spellbinder_(DC_Comics)
http://en.wikipedia.org/wiki/Terrible_Trio
Posted by Skippy at 3:36 PM No comments:

The Legion of Super-Heroes

The Scarlet Skier a.k.a Dren Keeg (a parody of the Silver Surfer) was the herald of a cosmic called Mr. Nebula (a parody of Galactus), but he didn't want to. Using his Cosmic Skies and Cosmic Armor that grants air in the vacuum of space, super strength, and super endurance tried to escape him several times, but fails. He finally escape only to be trapped in a L.E.G.I.O.N jail by the idiot Green Lantern G'nort, causing them to be archenemies. He manages to get free and tries to get revenge on G'nort (at the Justice League New York base at the time) and tracks him down, but in the process destroys the skies (his only mode of transportation). After being defeated, G'nort stops him from killing himself. G'nort tried to fix the Skier's skies, but only causing them to exploded. He later befriends G'nort and becomes a member of the Justice League of Antarctica.
References:
http://en.wikipedia.org/wiki/Scarlet_Skier
Posted by Skippy at 6:05 PM No comments:

Wade Winston Wilson was the son of a mentally ill mother and army general, who cause him to be a teenage delinquent. After being kicked out of the army, he became a mercenary. Eventually, he got a deadly form of cancer. So he joined a government program called "The Weapon X Project". He gained regenerative healing, that cured the cancer, but was considered a failure and was put under the "care" of Doctor Killebrew, who made them play his "game" Dead pool, where inmate bet on how long person will last though painful and deadly genetic experiments his did to them. By some miracle Wade survived and escape. He returned to being a mercenary and took the name Dead Pool. This time he had many encounters with mutants including the X-men, the shape shifting Copycat, the telepathic / telekinetic Cable and Siren (who has the Banshee's powers), who he had a crush on. Dead Pool is one of the few Marvel characters that knows he's in a comic.
References:
X-men Ultimate Guide
http://en.wikipedia.org/wiki/Deadpool_(comics)
Posted by Skippy at 2:33 PM No comments: 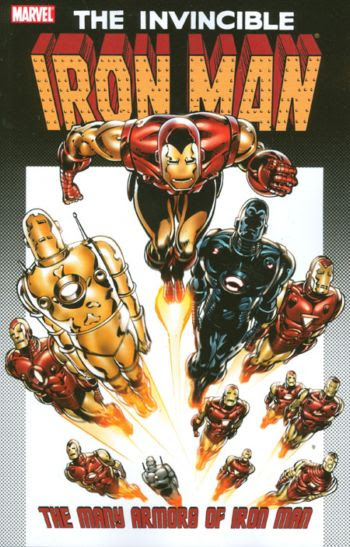 Tony Stark was a rich inventor who had the good life. Until one day, a Chinese crime lord kidnapped him, however in the process, Tony got shot in the heart. So he built a rechargeable chest plate that kept him alive. With the help of another kidnapped scientist, he built a bulky grey Iron Man suit (later he spray painted it gold). Iron Man (Tony) escaped, but the other scientist died. Later, he went though some fashion changes. His foes include the Crimson Dynamo and the Titanium Man ( Russian versions of himself), the super flexible Scarecrow (not to be confused with the Batman foe), the Mandarin (has alien rings each with a different power), the psonic M.O.D.O.K a.k.a M.O.D.O.C (who is basically a giant head with limbs), Grey Gargoyle (what ever touches his right hand turns to stone), the monstrous Fin Fang Foom, Blacklash and Blizzard (has water and ice manipulation).
References:
Tales of Suspense issue #39, 46, 50, 51 and 69
http://en.wikipedia.org/wiki/Iron_Man_(1994_TV_series)
Posted by Skippy at 7:15 AM 2 comments: