The first "Iron Man" was a real person: Lou Gehrig. He worked for the Ironman Batteries and was called Iron Horse, because he never got hurt in a baseball game. Illness made him too weak to play.
The second "Iron Man" was a Japanese cartoon character, who was known as Gigantor. He was originally called "Tetsujin" ("Iron Man"). He kinda looked like the original Iron Man.
Iron Man's next predecessor was Rocketman. He was a serial hero with an atomic-powered jet pack and a helmet that looks likes the original Iron Man's.
Stan Lee created a robot that was kinda a prototype-Iron Man that appeared in I Became A Human Robot!

Before the appearance of Stan Lee's Iron Man, there was a story called Man of Iron, which had the similar "iron lettering" Iron Man's logo.
References:
http://www.dialbforblog.com/archives/422/
http://blogs.lubbockonline.com/hero/files/2007/06/gigantor.jpg
Posted by Skippy at 6:22 PM 1 comment: 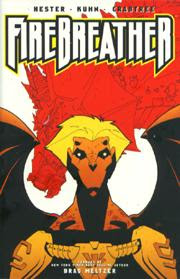 Character Overview
Duncan Rosenblatt (full name is Duncan Xeres Absalom Wu Fan Cassius Draco Draconus Quetzelcoatl Gondwana Mjarl Khan Belloc-Rosenblatt Jr.) is a teenager with average teenage problems and one not so average problem: he the son a divorced "normal" human mother, who wants him to live a normal life; and a 300-foot dragon, who wants him to conquer the world and become king of monster. Duncan and his mom move a lot.
Firebreather Vol. 1 # 1-4
Duncan was having his first day another school, but both the principal and a bully named Troy are picking on him. To make this worst, his father was putting him through brutish training. Troy decides set up Rosenblatt by hiding a gun, this causes Duncan to question if should be in human society. When he gets home, he discovers that a monster destroyed his house and kidnapped his mom. He tracks the monster to Monster Island and burned it with his flame, but kept it alive. Belloc (his dad) comes and attacks the monster. Duncan figured out that his dad set this up to test him! He then threatens his father to kill him if he endanger his mother again. As Duncan leaves, Belloc says "That's my boy".
Firebreather: The Iron Saint (One Shot)
Duncan and his class are in London and hear about a suit of armor (the "Iron Saint"), created to kill monster. Duncan stays behind and the suit seemly comes to life! Actually, Mr. M (the guide) was wearing it and wanted to kill Duncan (his dad destroyed Mr. M's home), but the suit is ineffective, due to it cannot harms humans or the suit will be destoryed and Duncan is half one.
Powers and Abilities
Duncan has superhuman strength and durability. Like any dragon, Duncan can fly and (of course) breathe fire.
References:
http://en.wikipedia.org/wiki/Firebreather
http://upload.wikimedia.org/wikipedia/en/1/14/Firebreathertpb.jpg
Posted by Skippy at 5:14 AM No comments: 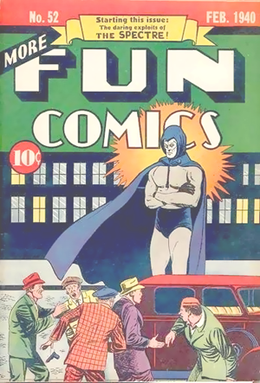 Golden Age Version
Jim Corrigan was cop that was murdered. But, his spirit was denied entrance into the afterlife. He returned to Earth as a undead being and was assigned to be a superhero by "The Voice" (God?). As the Spectre, he was seeking bloody vengeance against Corrigan's murders. He founded the Justice Society of America.
Silver Age Version
This version was some what rewritten from his Golden Age counterpart. He was still an avenging spirit, but he was also nearly omnipotence.
Bronze Age Version
Again, the Spectre was some what rewritten. Here, he used his power in gruesome ways, giving "poetic-justice" to criminals: melting him like wax, turning them to glass and then shoving off a cliff and etc. Many fans were unease by this version of the Spectre, so a reporter called Earl Crawford (who also found the Spectre disturbing) was introduced. He fought in the Crisis on Infinite Earths.
Modern Age Version
This version had both elements of an avenging spirit and a brutal police man. It's revealed the Spectre wasn't actually Jim, but a fallen angel. He possessed Hal Jordon's dead body to stop the fear-entity Parallax. In the Day of Vengeance storyline, he was tricked into causing havoc among magic-users. Later, the Spectre got a new host (he left the Hal Jordon body): Crispus Allen. In Blackest Night, a Black Lantern ring turned Crispus into a zombie (with the Spectre still in it!), but Hal Jordon (somehow alive) saved him.
Powers and Abilities
The Spectre can do almost anything, when he has a host. However, he's venerable to strong magic and needs a host.
References:
http://en.wikipedia.org/wiki/Spectre_(comics)
http://upload.wikimedia.org/wikipedia/en/0/0d/Morefun52.png
http://dc.wikia.com/wiki/Aztar_(New_Earth)
Posted by Skippy at 5:57 AM No comments:

Despite being the "sister" race of the Green Martians, the two are polar opposites.
History
Eons ago, the White Martians savagely tried to take over the Earth. But, their peaceful counterparts, the Green Martians, trapped them in the Still Zone (Phantom Zone), for the choas they caused on Earth. Eons later, the White Martians escaped. Eight of their Martian leaders posed as superheroes, calling themselves the "Hyperclan". But, the Justice League figured out their plans and stopped them. Despite that their memories were erased and were turned into "humans", the Hyperclan tried to cause havoc, but the JLA stopped them and trapped them in the Still Zone.
Powers and Abilities
All the White Martians have flight, super strength, telepathy and the force-blasting "Martian Vision". They can also shape-shift. Some White Martians possesses unique abilities not possessed by the rest of the race. Like Green Martians, exposure to fire removes their powers.
References:
The DC Comic Encyclopedia
http://upload.wikimedia.org/wikipedia/en/thumb/3/38/Jla57.jpg/250px-Jla57.jpg
Posted by Skippy at 11:34 AM No comments: