Cosmo and Orbi
Cosmo and his pal Orbi were two brave martian astronauts going to Earth in search of intelligent life. They were launched in a space ship created by Prof. Thimk. However, they had a detour (thanks to a meteor) and landed on the moon. They landed on Earth and after a misadventure fled the planet. They went on more adventures with Cosmo's girlfriend, Astra. In each adventure, they visited a new planet and every story ended in a cliffhanger (including the last).
Reference:
http://www.toonopedia.com/cosmomar.htm
http://cdn2.ioffer.com/img/item/105/358/111/o_CsnIyELxyYwNlMq.jpg
Posted by Skippy at 3:10 PM No comments: 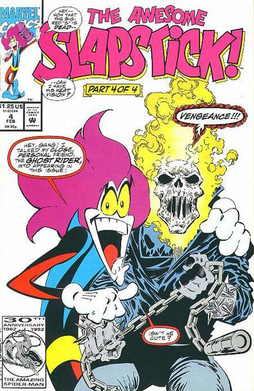 Fictional History
Origin
Steven Harmon was junior high school student, who's archenemy was Winston. He plotted to get back at Winston, this involved dressing like a clown at a carnival. But before he his plan could unfold, evil clowns kidnapped Winston and Heather (Steven's date). The clowns enter a portal (disguised as a mirror). Steve followed them into the portal and his molecule got stretched across 3,741 dimensions. He ended up in the realm of the Scientist Supreme of Dimension X (who kinda looks like Groucho Marx), who helped him master his new form (made of unstable molecules). The SSD thinks the reason why Steve was transformed was because Steve was "slightly out of sync" while going through the portal. Steve (as Slapstick0) stopped the evil clowns and their leader, Overlord, from brainwashing captive humans into being his slaves.
Other Enemies
Slapstick has had several other enemies: a "copycat of the Punisher", Overkill, who wanted kill Slap for being different. He stopped Neutron Bum, a homeless man able to create explosions, by giving him coffee and knocking him out when he wasn't looking. He helped the New Warriors battled Dr. Yesterday (mainly to impress the ladies).
Later
Slapstick's identity was made public during the Civil War. He is seen going to Camp Hammond and stopping the Hulk and working on several missions.
Powers and Abilities
As Slapstick, Steve Harmon is indestructible, any damage is quickly shaken off. He has super durability, agility and reflexes. He also has unlimited malleability ( in the manner of a Loony Tunes character). A specific frequency of energy can turn him into a puddle and back. He can get superhuman strength when electrocuted. He has alien technology most notably pockets links into another dimension allowing him to store virtually anything in there. Steve is a skill prankster.
Personality
Speedball (Slapstick's best friend) described Slap as "The hero who doesn't fight crime but rather plays cruel tricks on it."
References:
http://en.wikipedia.org/wiki/Slapstick_(comics)
http://upload.wikimedia.org/wikipedia/en/8/81/Slapstickmu0.png
Posted by Skippy at 4:29 AM No comments: 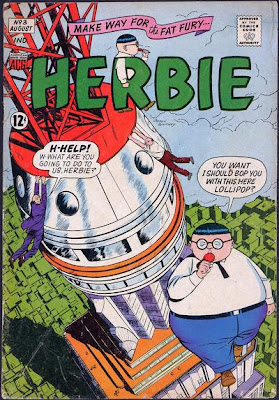 Herbie is one of the most powerful superheroes ever created!
Character Overview
Herbie appears to be simply a fat guy addicted to lollipops and was despised by his peers. But unknown to anyone else, Herbie has a large of array of super powers. He got them genetically and from his magic lollipops from the Unknown. He would use his powers to stop a crisis, but similar to Michigan J. Frog, he shed all signs of being extraordinary when anyone else was looking. By issue 8 of his series, he became a hero: the Fat Fury! His costume consisted of red long johns, a mask and a toilet plunder (oddly on his head). His father, Pincus Popnecker, was a very dumb business man that Herbie would bail out when his plans failed.
Powers and Abilities
Herbie had numerous super powers including:
Recurring Gags
There were some recurring gags including:

Posted by Skippy at 3:04 PM No comments:

List of the 10 Comic Characters that Should Get Movie Time

I created this post of List of the 10 Comic Characters that Should Get Movie Time, because I felt these characters are uderused. Here my list from 1 t0 10: 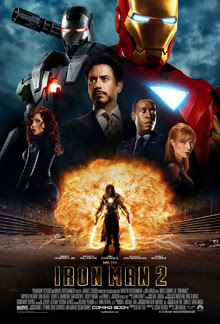 I decided to write a review of the recent Iron Man 2 movie. Warning, this cotains spoilers!!!
Plot
Six months after the first movie, Iron Man (Robert Downey, Jr.) is maintaining world peace, but the government is trying to get him to give up his suit. To make things worst, his artificial heart is slowly poisoning him, so he acts selfishly toward Pepper Potts (Gwyneth Paltrow) and James Rhodes (Don Cheadle). Nick Fury (Samuel L. Jackson) sent Natasha Romanoff (Scarlett Johansson) to spy on Tony. Oh and also, an insane scientist Ivan Vanko (Mickey Rourke), who hates the Stark family, is working with Tony's rival, Justin Hammer (Sam Rockwell), to make him look like an idiot at his own convention.
My Reaction
I personally disliked the movie. The so-called "Ivan Vanko" was a thinly-veiled rip off of the Crisimon Dynamo and Blacklash. The character's portrayal was very offensive towards Russians. Iron Man was a cocky, selfish, drunk idiot and his actions were very unjust. Ivan Vanko's robots were rip offs of the 5th Crimson Dynamo. Anton Vanko (the 1st Crimson Dynamo) died in the first 5 minutes of the movie! They portrayed Nick Fury as being very antagonizing, which he isn't in the comics. The movie, itself, was just a pointless series of stupid stunts; multiple, confusing villains; and dumb storylines, although there were some fun moments.
References:
Iron Man 2
http://en.wikipedia.org/wiki/Crimson_Dynamo
http://upload.wikimedia.org/wikipedia/en/e/ed/Iron_Man_2_poster.jpg
Posted by Skippy at 1:55 PM No comments:

This team is like the Legion of Super-Heroes, just less effective.

Silver Age
The team was founded by 5 Legion of Super-Hero member rejects: Polar Boy (has cold manipulation and is the unofficial leader of the "subs"), Night Girl (has near-Superman-level strength, when not exposed to sun light), Stone Boy (turns into stone, but cannot move in this form), Fire Boy (breathes fire like a dragon) and Chlorophyll Kid (can make plants grow). They were "pinch hit" team for the Legion of Super-Heroes. They were fairly affective for a time. But thanks to writer Keith Griffin, they became comically ineffective. Several more Legion of Super-Hero rejects joined: Antenna Lad (can "tune" into any broadcast (past, present or future), usually at random), Color Kid (controls colors), Double-Header (has two heads), Infectious Lass (generates illnesses) and Porcupine Pete (shoot quills, has bad aim through). The team disbanded when Polar Boy joined the Legion of Super-Heroes. In the "Five Year Gap", Cosmic Boy, Bouncing Boy, Duo Damsel, Night Girl, Comet Queen and the new Karate Kid (no relation to the movie) formed a new version of the "Subs". In Legion of Super-Heroes vol.4, Fire Lad, Stone Boy, Chlorophyll Kid, Color Kid, Porcupine Pete, Grinn and Ron-Karr are members of the "Subs".
Threeboot
In the Legion of Super-Heroes 2004 revamp, several members of the Legion of Substitute Heroes appears, but are never referred to as such.
Post-Infinite Crisis
This version members were Infectious Lass, Color Kid, Double-Header, Night Girl, Polar Boy, Stone Boy and Rainbow Girl (wields the emotional spectrum). They helped the Legion of Super-Heroes defeat the evil alien-hating "Justice" League of Earth. After the JLE's defeat, the "subs" took over their satellite base. It's revealed that the reason why most of them were rejected was because Saturn Girl did subtle mind-readings of them and discover that either they didn't have enough control over them or they were simply too useless.
References:
http://en.wikipedia.org/wiki/Legion_of_Substitute_Heroes
Posted by Skippy at 4:53 PM No comments: 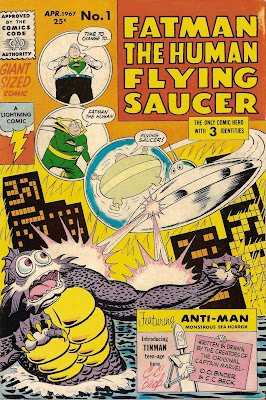 It's a Frisbee! No, It's a flying saucer! NO! It's Fatman the Human Flying Saucer!
Publication History
His double-size comic last three whole bi-monthly issues!
Fictional History
Van Cawford was a good-natured hobbyist that saved a flying saucer. Grateful, the aliens turned him into a human-alien hybrid that had the power to turn into a flying saucer. He decided to become a superhero. In his adventures, he gained allies, like Tinman (a skinny teen magically encased in metal), and enemies, like Anti-Man (an underwater monster that wanted to destroy all humans).
References:
http://www.toonopedia.com/fatman.htm
http://1.bp.blogspot.com/_8ie37mgxIXA/SM1gGGF9XnI/AAAAAAAADcw/8-GUfH0TZIw/s400/FM+CVR.jpg
Posted by Skippy at 5:37 PM No comments: 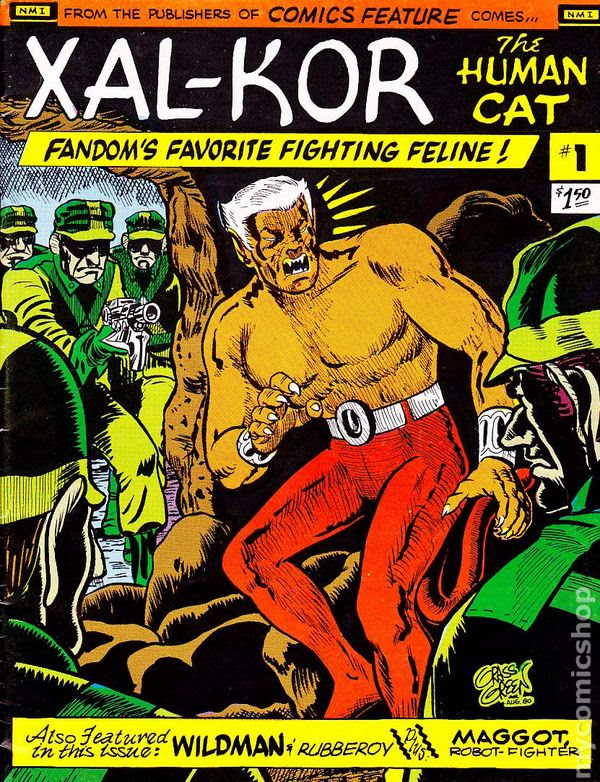 History
Xal-Kor was from the 4th dimension. He claimed his race was a group of cats that went into "hyper-evolution" (giving them human-like appearance and level-intelligence). Xal went to Earth to stop the "Rat people" known as "Rodentites" (who had similar powers as him) from conquering the Earth. Using his shape shifting, he took a job as a reporter named Colin Chambers (possibly a reference to Clark Kent). His Lois Lane-like secretary, Ann Rhoden, was really one of the Rodentites, but he didn't know this nor did she know that he was really Xal-Kor. He would often battle the Rodentites and usually acted kinda ruthless towards them (in his first appearance he killed two of them). But, he couldn't expose them because it would incite panic. He never actually completely stopped their plan (in every story there would be like a dozen left alive).
Powers and Abilities
Xal-Kor can shape shift into a human or a cat. It was revealed he needs to turn into his true form, before turning from cat to human (or vise versa). He has limited telepathic abilities towards cats. He is very strong and agile, but it's unclear if it's to the superhuman level.
References:
The Best of Star Studded Comics
http://d1466nnw0ex81e.cloudfront.net/n_iv/600/1153625.jpg
Posted by Skippy at 6:00 AM No comments: