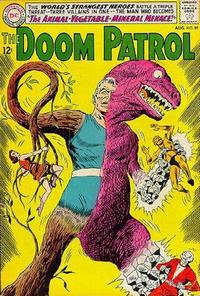 Dr. Sven Larsen was a student of Chief (Dr. Niles Caulder). They split after Sven said Caudler stole his idea for an anti-decay ray. When he fell in a pit of amino acid, he gained the power to turn into any mineral, plant or animal. So he tried to get his revenge on the Chief by destroying the Doom Patrol! But he lost both the battle and his powers (although he got them back!). He teamed up with the Norse god immortal General Immortus. But ended up frozen in a block of ice. His whereabouts now are unknown.
References:
http://en.wikipedia.org/wiki/Animal-Vegetable-Mineral_Man
http://upload.wikimedia.org/wikipedia/en/f/f6/DoomPatrol89.jpg
Posted by Skippy at 8:08 AM No comments: 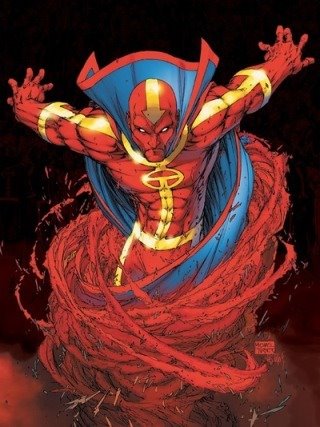 A tornado entity was both good and evil (mostly good) tried to create a perfect replica of Earth. Although it did a good job, the one thing missing was the Justice League! So it split itself to become the planet's JLA. It called itself the "Tornado Champion". However he discovered he also created an evil entity called "The Tornado Tyrant". But the good entity defeated the bad entity by senting it to Earth were the real JLA defeated. The good entity had little satisfaction being an only a imitation. He met Thomas Oscar Morrow (a.k.a T.O. Morrow), who was building a android to infiltrate and destroy Justice Society of America. So the entity merge with the robot, with one side effect: Tornado Champion lost it's memory. Thinking he was the first Red Tornado (JSA member named Ma Hunkel) and tried to join the JSA, the member didn't recognizing the android and was suspected he was part of some evil plan, however he eventually joined.
References:
http://en.wikipedia.org/wiki/Red_Tornado
http://2.bp.blogspot.com/_Hd7rG8Mvg3U/SWPcEg5eliI/AAAAAAAAAHo/SlIEItz5bVU/S1600-R/RedTornado-1.jpg
Posted by Skippy at 5:39 AM No comments: