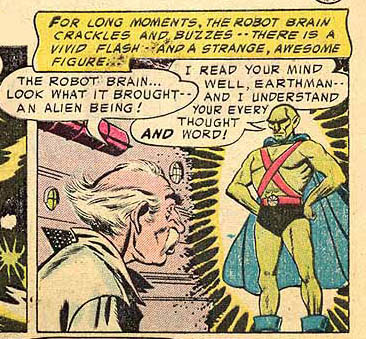 Early Years
J' onn J' onzz was a "normal" green martian, martian manhunter (police officer), until the mad Ma' alefa' ak (a green martian) spread a disease spread by telepathy that caused the green martain to burst into fire (their one weakness). Ma' alefa' ak was immune, because he has no telepathy and had immunity to fire. This plague kill everyone, expect him and J' onn (including J' onn's wife and daughter). J' onnn trapped Ma' alefa' ak under Mount Mons (Mars' biggest mountain).
Welcome to Earth!
He spent countless years until Dr. Saul Erdel built a machine to try to talk to martians. Image his surprise when it teleported him one! Dr. Saul Erdel helped nurse the distraught alien, before dying from a heart attack. Now stuck with no way home, J' onn became a superhero with the alter ego of John Jones (a detective that in reality was dead). He later became a founding member of the Justice league along with Flash (Barry Allen), Wonder Woman, Green Lantern (Hal Jordon), Superman, Aguaman and Batman.
Justice League International
While severing in the JLI, J' onn become the straight man for the team's comical situations and also obsessed with oreos cookies (partly due to Captain Marvel's influence). J' onn reveal his "real form" is really a mix of his human and martian forms.
Checkmate
When Checkmate tried to imprison the world's criminals on another planet, J' onn saved them.
Blackest Nigth
Having died a short time ago, J' onn joined the Black Lanterns. He confronts Barry Allen and Hal Jordon and says they should be dead before figthing them.
Powers and Abilites
Martian Manhunter has alot of powers making him "the Swiss Army Knife of superheroes". These are most from his telekinesis, genetic tampering and molecule control over his body. His amazing powers include:


However these power have one weakness: fire. He is scared of fire (it unknown if this a cultural or personal fear). Exposure to fire will cause to lose his powers and become vulnerable.

Posted by Skippy at 6:28 AM No comments: 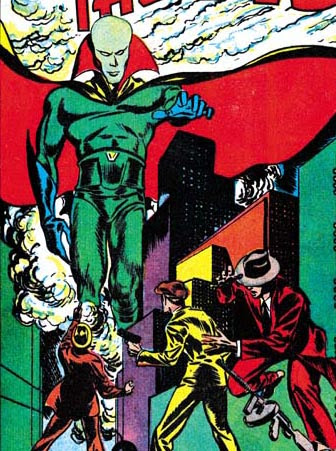 Aarkus was a superhero from the "Smoke-world" that came to Earth during War World II. He was suppose to keep the Cosmic Cube safe, but was distracted by World War 2. He took the name "the Vision" and battled Nazi. But later the Cosmic Cube (corrupted by human fear and despair) transformed him into a super powerful evil demon D' Spayre. But Doctor Strange and Echo used the Cosmic Cube to turn Aarkus good again and banish (the now-separate-entity) D' Spayre. Now as Aarkus, he join the Invaders
Vision has flight, ice manipulation, illusion casting, immortality, telepathy, superhuman endurance, teleportion (limited to wherever there's smoke) and wind burst generation.

Posted by Skippy at 6:50 AM No comments:

I am introducing a new "blog segment": Critic Corner. Here I'll tell you about my review of comic issues.
Comic: Action Comics No. 247
Stars: 4
Synopsis: Superboy meets the Legion of Super Heroes. They ofter him a chance to earn membership. But despite the fact they owe their existence to him, Superboy wasn't "super" enough!
Feature Characters: Superboy; Cosmic Boy, Saturn Girl and Lightning Lad (Legion of Super Heroes)
Trivia: 1) Saturn Girl said that she, Lightning Lad and Cosmic Boy got their powers from being alien, but it was revealed Lightning Lad got his powers when attacked by a "lightning beast". 2) Although this was intended to be a one-shot, the Legion was popular enough to feature in later stories.
References:
Showcase present: the Legion of Super Heroes http://www.legionarchives.com/site/data/gal_media/adventure_247.jpg
Posted by Skippy at 5:43 AM No comments:

The Big Red Cheese himself (up here)

It's bird! It's plane! It's some guy in red tights! Billy Batson was eleven-year-old orphan on the streets. One while in the subway, a stranger lead him a wizard called Shazam. Shazam gave the boy the power to when every he says "SHAZAM!", a magic lighting bolt turns him into the super-powerful , adult Captain Marvel. Captain Marvel has:


Later, he told his long-lost sister about his power and she gained them too. So their was a whole "Marvel family". Captain Marvel has three notable foes:

Posted by Skippy at 4:07 PM No comments: 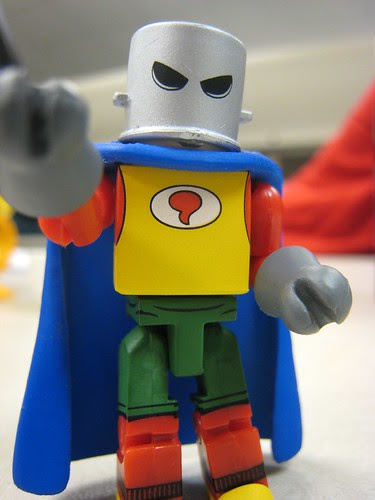 This hero is one of first super hero parodies and female comic heroes (and possibly the first). Abigial Mathilda "Ma" Hunkel was a working mother, whose whole neighborhood was threaten by a gang's protection racket. She was inspire for heroism by her son's admiration for Alan Scott (the Green Lantern) to become a crime-figther! She donned boxers, red long johns, a cooking pot (she put two holes in), a cape and T-shirt and became the Red Tornado! She was very good at figthing New York's (where she lives) crime, because of her uncanny figthing skills. She toke out the entire gang single-handily. She spends her early adventures parodying the superhero gene. She was often mistaken for a male. She tryed to join the Justice Society of America (the "Justice League" of the Golden Age), but her long johns tore, so she had to leave before trying out, but later became a honorary member. Later, her granddaughter joined the Justice Society.
Refrences:
http://en.wikipedia.org/wiki/Red_Tornado_(Golden_Age)
http://www.comicvine.com/ma-hunkel/29-41181/
http://farm3.static.flickr.com/2279/2137709069_74409530e1.jpg?v=0
Posted by Skippy at 3:18 PM No comments:

This guy is one of most deadest threats to human kind! Quisp is a fifth dimensional being that can warp reality by thinking! He left the 5th dimension to explore the 3rd and became the "Bat-Mite" of Aqua Man and Aqua Lad. One day Quisp discover his hero became darker and more serious. This inspired him to become a deadly threat. Calling himself Qwsp, he manipulated another 5th dimensional being, Lkz, to attack the 3rd dimension. It took the Justice League of America, the Justice Society of America and Captain Marvel to stop Qwsp's mad plan! During the battle, Lkz merged with one of Johnny Thunder's Thunderbolt (a 5th dimensional being called Yz) in a new being: Ylzkz. A teenager named Jakeem William took control over Ylzkz and later joined the Justice Society. But the Spectre overpowered them and banished them to the 5th dimension. Qwsp took over Jakeem's body and gained control over Thunderbolt. So he started a war in the 5th dimension. Although forced to obey both Qwsp and Jakeem, Mr. Terrific (who was helping out with Star Girl and Hour Man) convinced Thunderbolt to defy Jakeem, since he disobeyed Jakeem, by just throwing lightning, when order to kill them, even tought he could just kill them with one thought. He also conviced him just because something was always been that way in the past, it doesn't mean that it'll be the same in the future. So Thunderbolt drove Qwsp out of Jakeem and fell in the hands of Saradin.
Refrences:
http://www.dialbforblog.com/archives/2/qwsp.gif
http://en.wikipedia.org/wiki/Qwsp
Posted by Skippy at 4:35 PM No comments: 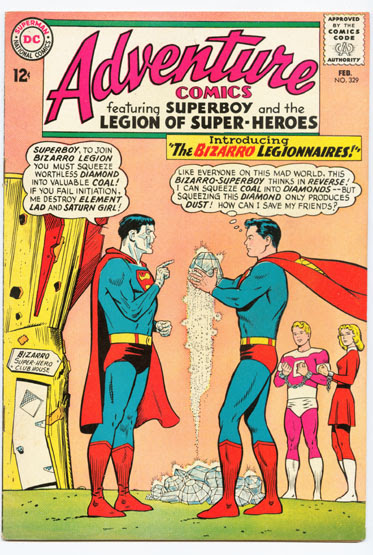 What is worse than a mindless and idiotic clone of a hero? Nine of them. That rigth: nine! When Bizarro Superboy (young Bizarro) was rejected from the Legion of Superheroes, he made his own legion, that he felt would fill the void in his life Legion membership would have filled. This Legion had Bizarro-versions of Lightning Lad, Saturn Girl, Cosmic Boy, Chameleon Boy, Invisible Kid, Ultra-Boy, Mon-El and Brainiac 5 (all of them have the same name of their counter parts just with the word "Bizarro" in front of it). They acted the opposite of their counterparts like Bizarro. But they had the same powers (unlike Bizarro), but with some imperfection. For example, Bizarro Invisible Kid could turn his body invisible, but not his clothes and Bizzaro Brainiac 5's inventions never worked out and thinking hurt his head. Under the command of Bizarro, the live by the Bizarro code (being the opposite of their counterparts) and did deeds they thought were good, but due to their logic cause grief for everyone they met. Their base was a beat-up club-house on Htrae and it had space-ship. They agreed to disband and stay in Htrae, if the Legion crushed their planet's diamonds into coal, which was more valuable (I have no idea how they did that). It's unknown if they survived the Crisis on Infinite Earths.
References:
http://www.readersadvice.com/lsh/lshaltb1.html
http://dc.wikia.com/wiki/Bizarro-Legion_(Pre-Zero_Hour)
http://www.amazingco.com/amazingco.com/comics/dc/items/dc1034.JPG
Posted by Skippy at 4:37 PM No comments: 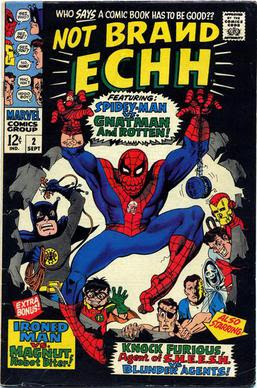 I decided to talk about a comic book series that parodies "normal" comic book characters. "Brand Echh" was term Stan Lee used to describe Marvel's competitors, hence the name. A typical issue would include parodies of comic characters (even Marvel's) in stories like Ironed Man (a Iron Man parody) vs. Mangus, the Robot Biter (a parody of Mangus, the Robot Figther). The comic introduced a memorible character called Forbush Man. Forbush Man was a wannbe hero with no powers and wore cooking pot in his head and red long johns with letter "F" on it. Events took place in the "Marble Universe".
Refrences:
Marvel Chronicles
http://en.wikipedia.org/wiki/Not_Brand_Echh
http://upload.wikimedia.org/wikipedia/en/1/11/NotBrandEchh2.jpg
Posted by Skippy at 5:37 AM No comments: 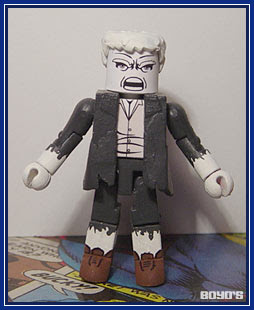 Cyrus Gold had a normal life and a not-so normal after-life. In the late 19Th century, he was murdered and dumped in the Gotham Swamp. 50 years later, Cyrus comes back to life as a dim-witted zombie with almost no memory of his life. He also spend those 50 years decaying (hence his appearance). He had also somehow gained superhuman endurance, strength, healing and the power to return form the dead. He met a hobo that asked him his name. He couldn't remember it, but he did remember he was "born on Monday". So the hobo tells him about the nursery rhyme character Solomon Grundy (who was also "born on Monday"). So Gold took up this name. Due to being nearly mindless and vicious, he turned to crime. He become the enemy of Alan Scott. Because plants are growing in Grundy's body, Alan's werid Lantern ring couldn't affect him. Solomon has been an enemy to almost all the Green Lanterns.
References:
http://www.joeacevedo.com/images/customzone/customcon/stephens2006/SolomonGrundy_one.jpg
http://en.wikipedia.org/wiki/Solomon_Grundy_(comics)
Posted by Skippy at 9:56 AM No comments: 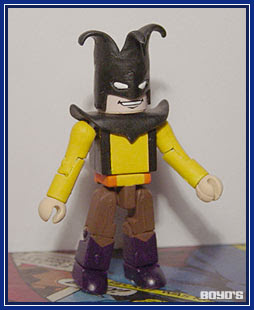 Toyman is one of DC comic's more ...um... unique villains.
Winslow Schott
Is he a children-loving toy-maker or a bloody killer? He is both! Winslow Schott was one of (if not the) best toy-makers, his goal was to make the best toy ever! One day a man from LexCorp named Walter Dunhill ofter him to mass produce his toys and made millions of kids happy. He first turned it down, because his wife was not to happy about the idea. But he agreed after his wife died. However Walter lied! He scammed Winslow out of his toy designs and his store! Walter refused to give back Winslow his store back, because he now owned it. That was a fatal mistake, because Winslow gave him a teddy bear that exploded and killed Walter! Soon Winslow tried to punish adult he thinks deserve it with toy-weapons and wearing a jester get-up. He is usually stopped by Superman or Batman. However he never lost his love for children. So he one of Superman's most unpredictable foe.
Jack Nimball
He took up the mantle of Toyman when Winslow retired. But he just used the same stuff as Winslow and even wore an exact copy of Schott's costume. He was killed by Schott, when he went out of retirement.
Hiro Okamura
He is a teenage hero that uses toy-weapons like Winslow and Jack from Japan, however he does anime and magna toys instead.
References:
http://en.wikipedia.org/wiki/Toyman
http://www.joeacevedo.com/images/customzone/customcon/stephens2006/Toyman_one.jpg
http://www.comicvine.com/toyman/29-1814/
Posted by Skippy at 3:06 PM No comments: