Batman has one of the biggest rogue's gallery of any superhero. As such, he is no stranger to villains with weird gimmicks. The Eraser is definitely one of them.
History
Leonard "Lenny" Fiasco was a college student and classmate of Bruce Wayne. Lenny was constantly mocked by his classmates for his mistakes. Leonard had a crush on his classmate Celia Smith. However when he was about to ask her to an ice carnival, she decided to go with Bruce Wayne. Angered, this led him to a life of crime. Leonard became a cleaner (a criminal that removes evidence from crime scenes) that charged 20% of the crime's profits for his services. He donned a pencil costume and dubbed himself "the Eraser". Baffled by the Eraser, the police has Batman faked a crime scene and "hire" the Eraser to remove the "evidence". When Batman confronted him, the Eraser (due to various minor details) figured out Batman is Bruce Wayne and explained his back story. Batman revealed he doesn't even remember Celia Smith. Enraged, Eraser used sleeping gas to knock Batman. He dragged Batman to a recreation of the ice carnival. Robin freed Batman and the duo defeat the Eraser. The Eraser has since appeared mainly in cameos most notably "Batman: RIP"  (in Bruce's imagination) and "Whatever Happened to the Caped Crusader?".
Powers and Abilities
Like many Batman villains, the Eraser has no powers. However, he has gadgets instead. He wears pencil-point bladed shoes that can emit sleeping gas. He wears a helmet that has an eraser that he can use to erase things like fingerprints, footprints and so on.
References:
http://www.comicvine.com/eraser/4005-38566/
Posted by Skippy at 5:29 AM No comments:

For the unaware, the "Vault of Obscurity" segment of this blog has me talking about multiple characters that can't support their own post.
Doctor No-Face
Bartholomew Magan had a facial scar. As such, he tried to use a device to erase it . However, it work too well and erased his entire face. He decides to become a criminal for some reason. Taking the name "Dr. No-Face", Bart and his crime ring used the device to erase other people's faces. Batman and Robin stopped him. Doctor No-Face later had a cameo in the Batman: The Brave and the Bold.
Iznogoud
Iznogoud (pronounced "Is no good") is the Grand Vizier (a political adviser) to Haroun el-Poussah, the Caliph (ruler) of Bagdad. Despite pretending to be loyal to him, Iznogoud is actually trying to steal Haroun's position. Iznogoud is selfish, power-hungry and just generally a terrible person. He is aided by his lackey Dilat Laraht. Iznogoud's plan constantly fail and often leave him trapped in terrible fates (being a slave, transformed into a dog and etc.) that are ignored by the start of the next story.
The Black and White Bandit
Roscoe Chiara was an artist. Art lover and chemical company CEO Winsor Munsell hired Roscoe to make a painting of him with untested painting pigment. Naturally, Winsor didn't mention that the pigments were untested. Exposure to the pigments damaged Roscoe's vision causing him to see everything in black and white. The comic incorrectly calls this color blindness (which is actually an inability to distinguish certain colors such as red or green). As revenge, Roscoe became the super villain the Black and White Bandit and started stealing works of art from Munsell. Batman stopped him by luring him in a trap via a fake advertisement.
Roscoe is skilled at disguising himself. He has a gas mask and acess to chlorine gas. He has an escape zebra... seriously. At one point, BWB used black ink to blind Batman in order to distract him.
References:
http://dc.wikia.com/wiki/Bartholomew_Magan_(New_Earth)
http://www.comicvine.com/dr-no-face/4005-35260/images/
http://www.comicvine.com/iznogoud/4005-41429/
http://tvtropes.org/pmwiki/pmwiki.php/ComicBook/Iznogoud
http://dc.wikia.com/wiki/Roscoe_Chiara_(New_Earth)
Posted by Skippy at 2:12 PM No comments:

Ant-Man has a rogues gallery full of laughable villains such as the Human Top, Egghead and Porcupine. Here is one of the more bizarre members of his rogue gallery: the Living Eraser.
History
The Living Eraser is from Dimension Z (no connection to Dimension X from TMNT), which occupies the same space as our dimension but in a different universe (lets pretend that makes sense). He was sent to Earth to "erase" several scientists. In reality, he was teleporting them to Dimension Z, where they were held prisioner. Among his victims was Henry Pym, the original Ant-Man. However, Henry secretly smuggled the Wasp with him. As such, she helped free Henry. The duo fought an army of Dimension Z aliens and found their chief sciencist. Eraser killed the alien sciencist to prevent the secret of the techology getting in the hands of humanity. However, Eraser revealed his power came from the gadgets on his palms. As such, the Wasp and Ant-Man stole them and took the sciencist home. The Living Eraser appeared time from time later on and fought foes such as She-Hulk, the Thing and Morbius.
Powers and Abilities
The Living Eraser's powers come from the "atomically printed circuit[s]" on his hands. This allows him to "erase" people. In reality, the "erased" people are being sent to Dimension Z.
References:
http://www.comicvine.com/living-eraser/4005-12631/
Posted by Skippy at 7:23 AM No comments:

The True Hero of Black Summer

Black Summer is a comic written by Warren Ellis and drawn by Juan José Ryp. The comic focuses on the Seven Guns, a government-created superhero team. John Horus (the most powerful of the Guns) kills the president, his advisers and some secret service agents. Because of this, the government has Frank Blacksmith (an unofficial eighth member that helped create the team) hunt down the Seven Guns. Despite the Seven Guns being the protagonists, I found myself sympathizing more with Frank. This article is explain why he is the true hero.
The Seven Guns are Unstable and Dangerous
First off, let us look at the Seven Guns themselves. John Horus is (according to Tom Noir) paranoid and prone to overacting. A flashback seems to suggest John thinks he is superior to humans and invincible (which seemed to be supported with some dialogue he shares with Frank where talks about how he is the "hero"). To top it off, he kills the president and expects everyone to be fine with it. Kathryn Artemis openly supports John's actions and convinces her teammates to kill the government agents who are trying arrest John for his crimes. In a flashback, Artemis throws a knife at Frank with little provocation. Zoe Jump and Angel One do whatever Artemis tell her to. Tom Noir and Laura Torch (who is otherwise a nonentity due to dying prior to the story) altered Laura's weapon without anyone's supervision or approval. Then, they hide the fact the weapon is now powerful enough to fight John. Dominic Atlas Hyde's motivation to join the team is that he wants to be important and NOT for doing good. All of them are willing to resort to murder as a first choice. Only Angel One expresses concern for human life and even then it only happens once. None of them seem to even attempt to incapacitate their enemies and go straight for the kill. Add to all of that the fact they have extremely rare powers that most of the military is improperly equipped to fight. So, they are not only unstable, but have superpowers that allow them to cause even more damage.
Frank is Trying to Maintain Order
Frank seems to be mainly concerned with maintaining order. He never defies his superiors when it would suit him. For example, he has a special task force for fighting the Guns and doesn't use them until he gets the approval. Frank gives a speech to a chauffeur about how he wants to protect people. Frank formed the Seven Guns to fight corrupt cops and security firms. So, he wasn't being blind in his desire for order. In his final confrontation with John, he (rightfully) points out how the government exists to enforce the law and that "one man wearing a ... bucket on his head does not get to decide what laws are".
He is not Remorseless
Frank actually shows several times that isn't an emotionless monster. While in a car, Frank gives a speech about how he is "trying to protect what [he] love". It is implied he is talking about the American public. When he thinks that John defiled Laura's grave, he is visibly upset and yells at John about how he cared about her.
References
Black Summer trade paperback
Posted by Skippy at 7:33 AM No comments: 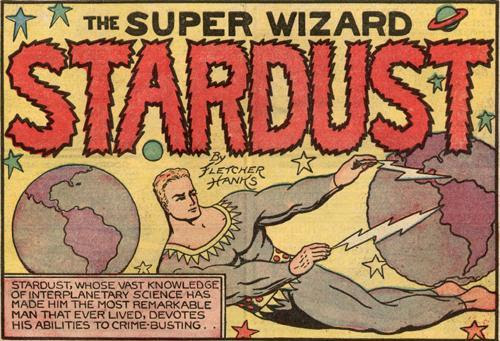 Overview
Stardust the Super Wizard is alien crime fighter that lives on a "private star". For some reason, he spends a disproportional time on Earth (which discovered via radio signals). On Earth, Stardust uses his powers to fight enemies of the U.S. usually terrorists and crimelords.
Stardust's stories had the same format. Stardust uses his alien techology to discover the villains' plan. The villains run amok leading Stardust to rush to Earth. Stardust arrives just before the villain's plan can be completed. He then uses his powers to the stop the plan (often using a new power that near-instantly solves the problem). Stardust would use his powers to unleash some horrific fate upon the villains ranging from turning them into rat-monsters to trapping them on an alien planet to simply giving them to the police.
Powers
Stardust has vast knoweldge of alien sciences. He seems to virtually omnipotent since he constantly display new powers. Among the more common powers are interplanetary travel, flight, invulerability, ray beams with different effects, teleportion (which usually generate a bright, star-shaped brust of light) and some form of matter manipulation.
Copyright Status
Stardust the Super Wizard is in public domain. However, AC Comics have a trademarked character called "Stardust". As such, the name can't be used in ways that could cause trademark confusion. Despite this, the interior pages can still use the name. This is similar to how the DC Comics Captain Marvel can't be a comic called "Captain Marvel" due to Marvel Comics copyrighting the name.
References:
http://pdsh.wikia.com/wiki/Stardust
The Comics of Fletcher Hanks: I Shall Destroy All The Civilized Planets
Posted by Skippy at 4:28 PM No comments:

History
Going to work, Dwayne Geyer was attacked by an alien that tried to drink Geyer's spinal fluid. The alien flew into air while trying to suck his fuild. However, the alien accidentally released Dwayne when it got distracted causing Geyer to fall onto the ground. When he woke him up, Geyer discovered he was invisible and his powers. He decided to become a vigilante and took the name "Geist". At work, he was attacked by the alien. However, he, Batman and Azrael stopped the alien. Geist started his superhero carrer. He met several "New Bloods" (heroes that gained their powers the same way Dwayne did) and helped the Justice League. Geist joined Blood Pack, a superhero team / reality show. He tampered with a camera and discovered the security team killed one of the Blood Pack member. Geist revealed this to his teammate. They plotted to do something about this. What happened is never revealed. Later, Superboy-Prime killed Geist during Infinite Crisis. Geist was brought back as one of Alex Luthor's undead Black Lantern with the purpose to kill SP. Prime got his hand on one of the black rings, which his extreme emotion morphed into a Red Lantern ring. The enegry released by this killed Geist.
Powers and Abilities
When in direct light, Geist becomes invisible. However, he cannot his sight in this state. In dark, he gains enchanced eyesight. As such, he wears dark goggles so his enchanced vision can combat his blindness. With enough concetration, he can turn other objects invisible.
References:
http://www.comicvine.com/geist/4005-32657/
Atop the Fourth Wall "Blood Pack # 1"
Posted by Skippy at 2:27 PM No comments: